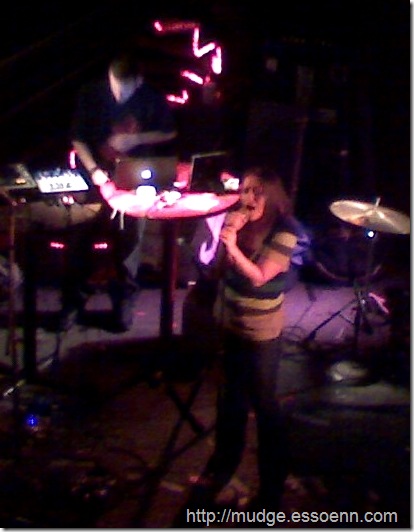 The photo was taken under desperately overmatched conditions at a live concert in a Chicago club called Subterranean last night.

The track just below the photo was the number performed, called “Juicy Love,” a track on a new release by MUDGElet No. 3, AKA Release. The soloist, who goes by the nom de musique Scarlet Monk, also wrote the lyrics for that track.

She’s front and center, the composer, producer and evening’s promoter can be discerned, only sketchily, in the background. He was fully there, mind you, but the camera phone I used was not up to the task of getting a decent shot under low light conditions from our perch in the balcony.

Here’s a track showcasing some more of the electronic artistry of Release:

The concert was the release party for the new album, which by the way, is available (as of this writing) as a free download at his colleague’s website: cichi.com, which also provides a MySpace link to the artist, himself. Check it out.

The club, which, one of my son’s featured performers took pains to let me know, was once an infamous brothel, takes over several levels of an aging, but remarkable space in a neighborhood, itself aging but remarkable, reclaimed from blight and now full of artists, their energy, and art, and the young people who flock to same.

Quite an experience, for the 3-1/2 hours we could take it: music, and life, lived LOUD. We were home at midnight, quite late for us. He and his lovely girlfriend, finally landed at the home of another performer friend, at around 5:00am. Life, lived rather vampiric.

Having an artist in the family is often rewarding, as was most of last night, and almost always challenging.

This entry was posted on Sunday, August 17th, 2008 at 8:40 pm and is filed under Audio, Life, Music. You can follow any responses to this entry through the RSS 2.0 feed. You can leave a response, or trackback from your own site.

3 Responses to mm471: Art and artists