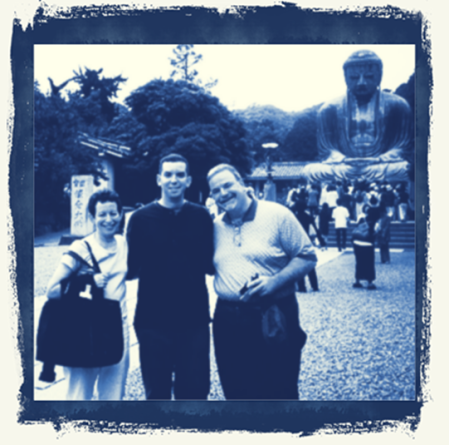 Gotta tell you about China Pete’s. When we had visited the Navy Exchange on Saturday, we looked at their gift section, especially the ceramics, with an eye on our gift shopping list. Dan said that we should not purchase anything here, but rather we would find China Pete’s in Yokohama on Sunday. Dan had been there, and said it was worth the trip for this kind of gift.

Dan didn’t locate directions to China Pete’s in time for your Yokohama jaunt on Sunday. It turned out that that was just as well, since when he finally did locate instructions when he went back to work on Monday, they indicated that C.P.’s is closed Sundays. So Tuesday, our first day on our own (Dan worked all day), we would go find China Pete’s.

Among the river of traffic 15 feet from our windows are four different bus lines, numbers 4, 5, 6 and 7, any of which could, and some of which did, take us to and from Zushi, a town a few miles away from Hayama, and a stop on the JR. We had taken such a bus on Monday, which was a revelation to Dan, who had known it was feasible, but hadn’t yet had the occasion to take it.

Buses, in contrast to the trains, according to every tour guide we’ve looked at, and we’ve looked at many, are difficult enough for tourists that the experts recommend against them. No English signage at all, unlike the trains, most of which have station names in English. The fare system is complex, most of them using a zone system. Sometimes you get on at the back, and take a ticket. Sometimes (in Yokohama, for example) you get on in front and pay a fixed fare. Sometimes you get on at the back but don’t get a ticket (because, Dan figured out, we got on at the beginning of the run and didn’t need one). The buses from Hayama to Zushi and back, depending on the time of day, and maybe the route (difficult for me to tell), varied between 15-30 minutes in duration, at a cost of ¥270.

This is good information for Dan, who now knows that he’s got a reasonable fallback in case he has car trouble, since he can pick up a train at Zushi which would take him to within a 10-minute walk of the base’s main gate.

Back to Tuesday. Lynne and I intrepidly set off for the bus stop at about 9:20. We’d been to Yokohama on Sunday and thought that we were in for an 1½ hour trip. Instead, the number 5 bus that came took almost a half hour by itself to get to Zushi, due to lingering rush hour traffic. We needed to be directed to the correct track to Yokohama by a friendly stranger (thanks to Lynne who asked), since it wasn’t the same track we had taken the day before to go in the same direction. Go figure.

The train to Yokohama (six stops or so) took a half hour, standing room only. Following the detailed xeroxed instructions Dan had obtained, at Yokohama station (very, very busy) we followed the signs downstairs and then upstairs to the track for the Negishi line (sort familiar from Sunday), on which we rode for one stop. At Higashi-Kanagara, we transferred (across the platform) to the Yokohama line.

We expected a short ride, like the Chicago El. We got a 12-stop, 35-minute ride out to a suburb. It was pleasant enough (we had seats – did I mention they’re all upholstered, even in the buses?) but took much longer, and went much further than we had anticipated.

And, it was a challenge, because the further we got from the center of Yokohama (in importance, at least) the less English was available to us. Each previous train ride, I had spotted at least one western-appearing rider. On the Yokohama line, the only non-natives were your intrepid explorers. The bigger trains we rode on had annunciators over every door, which alternated Japanese with English: “Next: Higashi-Kanagara”. Very handy.

The Yokohama line was not so convenient. No annunciator. We had to listen carefully to the announcements by the conductor (slightly more intelligible to us than the standard CTA announcement, but still pretty opaque), or, more likely, peer out the window as we arrived at each station, looking for one of the two station signs that had English language translations. Lynne’s method was the best. China Pete’s instructions told us that our target station was approximately the twelfth stop. Lynne faithfully counted, and, sure enough, 12 it was. So, even with good instructions, a slightly nervous experience.

Then, the map challenge. Street addresses aren’t given out much in Japan, since most of the streets don’t have names. To find a specific place, you are given a map. And, without names or many numbers (Dan’s address, 1820A Somethingorother, is nowhere to be seen: no number, in Roman or Japanese, that I’ve found on his building; and no such street name to be found along the street itself), the mapmaker notes landmarks.

China Pete’s map had us looking first for the Tokai bank, opposite a police box, whatever that is; a Nissan Prince dealer and a used car dealer across the street from each other (and to cross that street required climbing an overpass bridge, which we did four goddam times!); and, incidentally noted a couple of restaurants, which actually came in handy. While that first checkpoint, the bank, wasn’t immediately obvious when we came down from the Fuchinobe station (and at busier stations than this one the direction you exit is crucial in instructions), it turned out to be where I expected it to be.

By the time we located C.P.’s, after a 25-minute stroll (78° -80°, sunny, humid), we were ready to lunch before shopping. Enter Denny’s. Now, I haven’t entered a Denny’s in many years, but it was a very attractive destination to we hungry and footsore journeyers so far from home base. After ascertaining that the menu had both pictures, and as a bonus, English descriptions under them, we sat down. Lynne had grilled chicken with a Caesar salad, and was offered a fork and knife. I had a combination plate of hot “Sukiyaki beef” (marinated, somewhat fatty beef, with rice) with a serving of cold soba, (soup with buckwheat long noodles, ground horseradish and the cutest little button mushrooms in a delicious cold broth) and was served chopsticks. (The Japanese couple who came in just after we did ordered food that I saw they ate with silverware.)

Fortified by Denny’s (and I’ll never laugh at them again) at a price of ¥2,058, we walked back to China Pete’s (up and over that damned bridge for time number three). This turned out to be a quiet, small (two stores with three showrooms between them) but quite delightfully stocked enterprise, and we were pleased to spend some time, and yen, inside. Ceramics and appropriate to our budget gift items, jumped off the shelves, to the extent that we were suddenly concerned about schlepping three substantial bags of merchandise back the way we’d come.

Schlep we did, retracing our footsteps back the 25-minutes to the station (just as hot and humid, but now with cargo), up to the ticket machine and down to the platform. Waited for about 15 minutes for the train (and boy, when the schedule said a train was due to depart at 14:16, it unfailingly did every time – so far), was pleased to get seats, and counted the twelve stops back to Hagashi-Kanagara. Walked across the platform for the Negishi train (love that symmetry) and took it back one stop to Yokohama. Walked downstairs from track 3, across and up to track 9, for the train back to Zushi, in which we again were pleased to be seated. Finally, back at Zushi (at a total cost of ¥890 each for the three-train ride – for some reason it was ¥870 out), boarded a number 7 bus this time, which made its semi-inscrutable way back to Highway 134 in Hayama. Then the last few steps, maybe two blocks, mostly downhill thank goodness, to Dan’s house. Quite an excursion, and a testimony to good directions, and, if the writer can be permitted some self-congratulation, good direction-following (I’m thinking this is a lost art).

Dan got home tired from a long day, and found his telephone not working. We’ll deal with that tomorrow. He cooked up rice in his electric rice cooker (a necessity we’ll add to our culinary repertoire as soon as we get home), and he and Lynne prepared stir –fried chicken and vegetables. Delicious.

We’re vacillating about our Tokyo plans and reservations (we have reservations about our reservations). We may can them all, and just handle Tokyo (overrated in Dan’s opinion anyway) as a day trip on Thursday. More later, I hope.

So, feeling a bit rusty after more than a four-year hiatus, and reflecting a totally internal need to get some content back into the ether, I’m repurposing a couple of personal travel journals. Because both are lengthy, in excess of 30 pages (Word document pages, that is), I plan to slice them up into more digestible form. I will try to resist the urge for much after-the-fact content or style edits, especially content. This is Yr (justifiably) humble svt, circa 2000, and the travelogue documents an amazing (for us) adventure, and where my head was at nearly 13 years ago. Your comments are always welcome.

This entry was posted on Sunday, March 17th, 2013 at 9:19 am and is filed under Blogging, Japan, Travel. You can follow any responses to this entry through the RSS 2.0 feed. You can leave a response, or trackback from your own site.