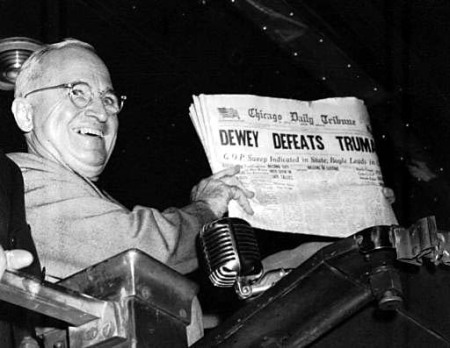 We’ve written before about our hometown newspaper, the Chicago Tribune.

Taken most seriously in its home town.

But proud of its Republican tradition. Its first editor of any distinction, Joseph Medill, was influential in winning the presidency for Abraham Lincoln.

That Republican heritage caused it to be newspaper non grata in my grandparents’ and my parents’ households, and indeed, our household for many years, until its more favored tabloid competitor, the once scrappy and progressive Sun-Times, was eviscerated by Rupert Murdoch, the first of a series of newspaper bandits that have effectively destroyed it. The latest in that series, Conrad Black, is in federal prison, convicted of fraud in connection with his newspaper properties.

The Tribune is <so> Republican that once, the year yr (justifiably) humble svt was born, they allowed wishful thinking to trump reality, resulting in the headline illustrated at the top of this post, a photograph that Wikipedia rightfully describes as one of the most famous ever published.

Times, even for the 161 year old Chicago Tribune, have changed.

FROM THE CHICAGO TRIBUNE EDITORIAL BOARD

However this election turns out, it will dramatically advance America’s slow progress toward equality and inclusion. It took Abraham Lincoln’s extraordinary courage in the Civil War to get us here. It took an epic battle to secure women the right to vote. It took the perseverance of the civil rights movement. Now we have an election in which we will choose the first African-American president . . . or the first female vice president.

In recent weeks it has been easy to lose sight of this history in the making. Americans are focused on the greatest threat to the world economic system in 80 years. They feel a personal vulnerability the likes of which they haven’t experienced since Sept. 11, 2001. It’s a different kind of vulnerability. Unlike Sept. 11, the economic threat hasn’t forged a common bond in this nation. It has fed anger, fear and mistrust.

On Nov. 4 we’re going to elect a president to lead us through a perilous time and restore in us a common sense of national purpose.

The strongest candidate to do that is Sen. Barack Obama. The Tribune is proud to endorse him today for president of the United States.

Do you get it yet?

In over 160 years, forty (40!) elections, the Tribune has NEVER endorsed a Democrat for president in a general election.

It’s an open question how influential newspapers, and more specifically, their endorsements, are with today’s voters. Newspapers are no longer the king of all media that they were in the days before electronic journalism.

But as a symbol of the utter bankruptcy of the Republican party, its candidates, Mad Capt. McCain and the Redneckette, and indeed, this country after eight years of George III’s misrule, this endorsement of Barack Obama is a telling indictment.

The Republican Party, the party of limited government, has lost its way. The government ran a $237 billion surplus in 2000, the year before Bush took office — and recorded a $455 billion deficit in 2008. The Republicans lost control of the U.S. House and Senate in 2006 because, as we said at the time, they gave the nation rampant spending and Capitol Hill corruption. They abandoned their principles. They paid the price.

We might have counted on John McCain to correct his party’s course. We like McCain. We endorsed him in the Republican primary in Illinois. In part because of his persuasion and resolve, the U.S. stands to win an unconditional victory in Iraq.

It is, though, hard to figure John McCain these days. He argued that President Bush’s tax cuts were fiscally irresponsible, but he now supports them. He promises a balanced budget by the end of his first term, but his tax cut plan would add an estimated $4.2 trillion in debt over 10 years. He has responded to the economic crisis with an angry, populist message and a misguided, $300 billion proposal to buy up bad mortgages.

McCain failed in his most important executive decision. Give him credit for choosing a female running mate–but he passed up any number of supremely qualified Republican women who could have served. Having called Obama not ready to lead, McCain chose Alaska Gov. Sarah Palin. His campaign has tried to stage-manage Palin’s exposure to the public. But it’s clear she is not prepared to step in at a moment’s notice and serve as president. McCain put his campaign before his country.

Now, I’m sure some of my friends and readers (you, too, Mr. M) will make the obvious connection of the Tribune‘s famous error at the top of this post, and today’s endorsement. “Hey, they’ve been famously wrong before!”

And there’s no denying two other salient facts: Barack Obama is a home town hero; and the Tribune’s new owner is Sam Zell, a billionaire real estate guy, and bottom feeding investor, although his political views hitherto have seemed to lean toward Republican candidates and causes.

The important difference between 1948 and 2008: there’s no wishful thinking in this endorsement.

And it’s fun to imagine Col. McCormick spinning in his grave.

It’s it for now. Thanks.

This entry was posted on Friday, October 17th, 2008 at 10:35 pm and is filed under McCain, Obama, Politics, Presidential election. You can follow any responses to this entry through the RSS 2.0 feed. You can leave a response, or trackback from your own site.

7 Responses to mm509: Hear that sound? It’s the ice skaters in hell!