mm212: Cheap computing in the news

We’ve appreciatively quoted John C. Dvorak here at Left-Handed Complement. First, because he writes about computer-based topics that interest me. Second, he writes quite well. Third, because his curmudgeonly chops put a guy named MUDGE to shame.

Today he weighs in on a familiar topic to L-HC reader, One Laptop Per Child. Dvorak, the curmudgeon’s curmudgeon, takes a pretty good swat at a program that we’ve enthusiastically followed for the past few months. For a history of our posts on this topic, you may peruse the links here:

One Laptop Per Child Doesn’t Change the World

Does anyone but me see the OLPC XO-1 as an insulting “let them eat cake” sort of message to the world’s poor?

Hands Across America, Live AID, the Concert for Bangladesh, and so on. The American (and world) public has witnessed one feel-good event (and the ensuing scandals) after another. Each one manages to assuage our guilt about the world’s problems, at least a little. Now these folks think that any sort of participation in these events, or even their good thoughts about world poverty and starvation, actually help. Now they can sleep at night. It doesn’t matter that nothing has really changed.

This is how I view the cute, little One Laptop Per Child (OLPC) XO-1 computer, technology designed for the impoverished children of Africa and Alabama. This machine, which is the brainchild of onetime MIT media lab honcho Nick Negroponte, will save the world. His vision is to supply every child with what amounts to an advertising delivery mechanism. Hence the boys at Google are big investors.

Whew, John! That emperor really is stumbling down the parade route starkers!

He does make a strong point, but I still like the initiative. Yes large swaths of the globe are starving, thirsty, and ignorant that there is anything better out there and how to get it. Yes, we need to send those folks food, pharmaceuticals, water purifiers.

But John, we can also send them practical educational devices, in the form of cute, green computers.

Maybe OLPC will help teach that world to feed, clothe and sustain themselves.

We actually found Dvorak when researching this next item. The folks at Zonbu have also struck again. We actually linked to our original post in the list above, here it is again. Never let it be said we at L-HC don’t deliver on the promise of Sequitur Service©.

Zonbu, maker of the Zonbu Mini desktop PC, has announced a notebook computer along the same lines, to be manufactured by Everex.

The Zonbu Notebook is designed to be environmentally friendly, with lower power usage and less hazardous material than normal laptops, and proper recycling techniques.

We wrote about the original desktop Zonbu, and compared it to OLPC. They both represent a reasonably clean sheet of paper as far as their attempts to reinvent computing in a basic, efficient, manifestly less costly way.

Have a guy on our

who has been talking up Zonbu; check him out if you like. I am always a fan of paying less, but I hardly think any of these devices are meant for the likes of yr humble svt. But, as I wrote previously,

Maybe someday, even MUDGE will pay less than $1200 for a PC. Never happened yet, since as prices per component go down, the sheer number of additional must-have components seems to have kept the price level, or growing. Maybe this paradigm shift will finally break that pattern.

mm099: A $99 Desktop Comes With Software, Backup and Too Many Catches

A few posts ago, we looked into the One Laptop Per Child laptop. Walter Mossberg of All Things Digital

A $99 Desktop Comes With Software, Backup and Too Many Catches

For just $99, you can now buy a desktop computer that’s preloaded with full versions of 20 popular types of software. This computer comes with free, automatic, online backup of your files, and a design that cuts energy use way below that of a standard computer.

It gets better. This new PC, called Zonbu, from a new company of the same name, automatically receives free updates of its software when new versions come out. It doesn’t require antivirus or other security programs because it runs on the Linux operating system, which has attracted very few viruses or spyware programs. And it takes up almost no room — it’s a tiny little box.

The full article has an excellent video from Walt Mossberg. Check it out:

A $99 Desktop Comes With Software, Backup and Too Many Catches

And, it’s green! This year’s buzzword. 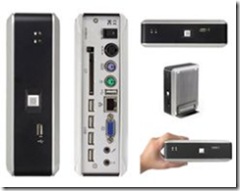 Zonbu is an interesting shot at a subscriber model for computing — pay for what you need, as you go. It’s not there yet, as they are asking for a 2 year subscription with payment in advance, but it’s a first step.

Competition will fix that. The cellphone people have figured out how the subscription model subsidizes the hardware, especially for commodity instruments.

Although based on Linux (and MUDGE is certainly not there yet) much of the included software, especially Firefox and OpenOffice MUDGE has long since adopted for personal use in his Windows system.

And the software that’s missing, like a personal finance package? I’m sure Google has one of those, or will have soon, on line like its office suite package. Would I like Google to keep my personal finances on line? Hell, no! But, it’s a concept.

I strongly support Zonbu’s goals of making computing simpler, cheaper and more energy efficient. But this product has too many compromises.

So, it’s officially a trend.

One Laptop Per Child (remember, it gets lots of its power from its hive network) for the third world; Zonbu and its certain to be improved successors for the first and second.

Maybe someday, even MUDGE will pay less than $1200 for a PC. Never happened yet, since as prices per component go down, the sheer number of additional must-have components seems to have kept the price level, or growing. Maybe this paradigm shift will finally break that pattern.