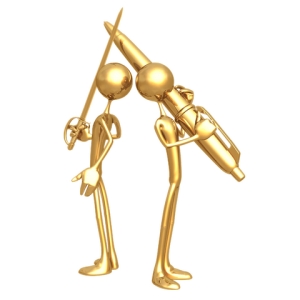 It may be election year silly season, that interim time before the nominating conventions ignite the run to Election Day, but, as Sara Robinson notes so colorfully below,”McCain’s shooting live rounds; and as usual, the Democrats are refusing to fire back.”

The roots of progressive candidates’ failure to respond in kind to the lying liars of the right can be found in this nation’s earliest history, if the socio-history referenced in Robinson’s blog post has validity.

Why We Don’t Shoot Back

Drew Westen and Mike Lux both have cogent and persuasive posts up that deftly explain — and raise the alarm about — the timidity that’s recently settled into Sen. Barack Obama’s presidential campaign. Sen. John McCain’s shooting live rounds now; and, as usual, the Democrats are refusing to fire back. If that doesn’t change — this week, before the Olympics starts — this could all too easily turn into Dukakis-all-over-again. …

We’ve all got our short lists of books that changed the way we look at things forever. One of the ones I keep going back to is Albion’s Seed: Four British Folkways in America, published in 1989 by Brandeis historian David Hackett Fischer. Fischer’s basic argument — which he supports with a weighty and richly researched sociological survey that runs to 700 pages plus another 200 pages of footnotes — is that most of America’s most enduring cultural and political conflicts can be traced back to essential differences between the first four groups of English settlers, who brought four very different worldviews with them, and set deep patterns that continue to influence America’s identity and choices to this day.