The Prime Directive of Blogging: Thou Shalt Blog Daily, has run head-on into the brick wall of fatigue.

Mrs. MUDGE, gathering a bunch of old clothes for a charity pick up tomorrow, has inspired us to gather some stories that we’ve stockpiled but simply can’t do more than whiff at them over the past few days.

So perhaps we’ll just showcase six of them without commentary, just this once. Pretend we’re reddit.com without the social networking trappings. Call this post: “(th)read(bare)it.” Or not.

1. The NYTimes takes a look at a brand new, cost saving (and, get this!, the savings seem to be mostly passed onto the consumer!) gallon milk jug.

2. The MUDGE household has been weaning itself from the bottled water habit for the past several months. We’re in the minority,apparently.

What’s Colorless and Tasteless And Smells Like . . . Money? – washingtonpost.com

END_OF_DOCUMENT_TOKEN_TO_BE_REPLACED

The other day we pointed toward a picture story highlighting the opening of a new sewage to tap water facility in Southern California.

Turns out that this wasn’t this nanocorner of the ‘Sphere©‘s first cut at the story. Two months ago we riffed extensively on this new facility.

Eileen Zimmerman has a detailed analysis that appeared at Slate.com recently; worth checking out.

Today, we look at water supplies for Southern California from a northern (California) perspective.

END_OF_DOCUMENT_TOKEN_TO_BE_REPLACED

mm266: Follow-ups and other voices heard

Responding to some internal and, interestingly, external disquiet regarding this space’s latest experiment with themes available here at the incomparable WordPress.com, we have, as we’re sure you’ve noticed, changed again.

Our latest choice is less visually jarring, at the cost of some blandness. Our critics might tell us that bland is beautiful, compared to the mess we left behind, and we apparently agreed. Responsiveness to the audience – what a concept!

Let us know whether you think we’re in a better place.

And, lest you, as does yr (justifiably) humble svt, miss our logo, as the new theme doesn’t allow header customization, here’s a fix.

Okay, let’s move on, shall we?

It’s a big planet, and there are a multiplicity of viewpoints and a waterfall of information pouring into this nanocorner of the ‘Sphere© every nanosecond.

So, we’re taking a breath, and taking an alternate look at a couple of topics covered earlier.

You guessed it: another episode of SASB: Short Attention Span Blogging!©

A couple of days ago, we explored some of the implications of the FDA’s approval to introduce cloned meat and dairy products into the marketplace. The concern is that as producers go for the easy, repetitive score, i.e., clone what works and eliminate the rest, the planet will permanently lose something important: species diversity.

This week’s NYTimes Magazine explores the issue from a different direction (and continent!), selective breeding rather than cloning (two sides of the same coin, actually). 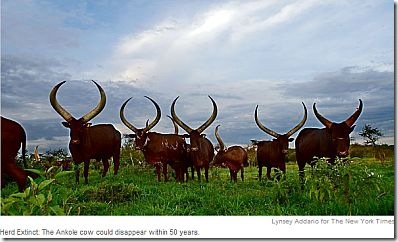 GERSHOM MUGIRA COMES from a long line of cattle-keepers. His people, the Bahima, are thought to have migrated into the hilly grasslands of western Uganda more than a thousand years ago, alongside a hardy breed of longhorns known as the Ankole. For centuries, man and beast subsisted there in a tight symbiotic embrace. Mugira’s nomadic ancestors wandered in search of fresh pasture for their cattle, which in turn provided them with milk. It is only within the last few generations that most Bahima have accepted the concept of private property. Mugira’s family lives on a 500-acre ranch, and one sunny day in November, the wiry 26-year-old showed me around, explaining, with some sadness but more pragmatism, why the Ankole breed that sustained his forebears for so many generations is now being driven to extinction….

In recent decades, global trade, sophisticated marketing, artificial insemination and the demands of agricultural economics have transformed the Holstein into the world’s predominant dairy breed. Indigenous animals like East Africa’s sinewy Ankole, the product of centuries of selection for traits adapted to harsh conditions, are struggling to compete with foreign imports bred for maximal production. This worries some scientists. The world’s food supply is increasingly dependent on a small and narrowing list of highly engineered breeds: the Holstein, the Large White pig and the Rhode Island Red and Leghorn chickens. There’s a risk that future diseases could ravage these homogeneous animal populations. Poor countries, which possess much of the world’s vanishing biodiversity, may also be discarding breeds that possess undiscovered genetic advantages. But farmers like Mugira say they can’t afford to wait for science. And so, on the African savanna, a competition for survival is underway….

The Food and Agriculture Organization, an agency of the United Nations, recently reported that at least 20 percent of the world’s estimated 7,600 livestock breeds are in danger of extinction. Experts are warning of a potential “meltdown” in global genetic diversity. Yet the plight of the Ankole illustrates the difficulty of balancing the conflicting goals of animal conservation and human prosperity. An estimated 70 percent of the world’s rural poor, some 630 million people, derive a substantial percentage of their income from livestock. Increase the productivity of these animals, development specialists say, and you improve dire living standards. The World Bank recently published a report saying it was time to place farming “afresh at the center of the development agenda.” Highly productive livestock breeds, the World Bank asserts, are playing an important role in alleviating poverty.

One additional advantage of the imported genetic stock: Ankole cattle require huge swaths of grassland; Holsteins can be penned. Writer Andrew Rice quotes some experts who say that “ethnic” warfare in Rwanda and Darfur as “really a fight over grass.”

The diversity the planet is losing is dire:

Many tropical breeds may possess unique adaptive traits. The problem is, we don’t know what is being lost. Earlier this year, the U.N.’s Food and Agriculture Organization released its first-ever global assessment of biodiversity in livestock. While data on many breeds are scant, the report found that over the last six years, an average of one breed a month has gone extinct. “The threat is imminent,” says Danielle Nierenberg, senior researcher at the Worldwatch Institute, an environmental group. “Just getting milk and meat into people’s mouths is not the answer.”

A lengthy, but most worthwhile read. The law of unintended consequences is one that will never be repealed.

Ultimately, it’s ALL recycled, isn’t it?

The water crisis in the Southeast and Western U.S. was approached a couple of weeks ago here.

Wired magazine has an intriguing update.

Fewer words than intriguing pix in this story.

Facilities like this one are going to have to become the norm if people insist on living in the desert.

Not as cheap as piping it in from the Great Lakes, Orange County, but that’s not on the table anyway.

All the water on the planet has been here since the catalytic cataclysm that created it in the first place. We’ve been drinking recycled water forever.

Thanks to this Fountain Valley facility and others soon to follow elsewhere, engineers have simply shortened the recycling time.

… and it could be catching on in China.

Several months ago, monks in Burma led massive demonstrations noted here, against the government which were ultimately suppressed, as usual, by the oppressive regime.

In Shanghai, people have been massing to demonstrate against expansion of a maglev high-speed rail line. The Washington Post has the story. 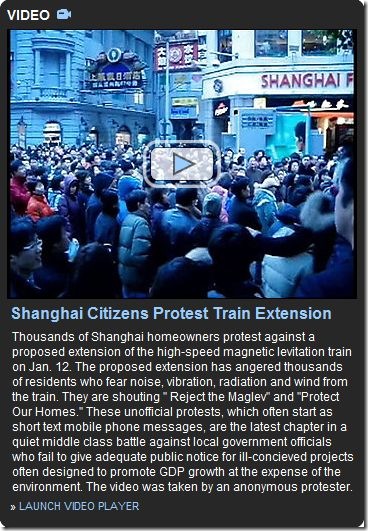 SHANGHAI — Bundled against the cold, the businessman made his way down the steps. Coming toward him in blue mittens was a middle-aged woman.

“Do you know that we’re going to take a stroll this weekend?” she whispered, using the latest euphemism for the unofficial protests that have unnerved authorities in Shanghai over the past month.

Behind her, protest banners streamed from the windows of high-rise apartment blocks, signs of middle-class discontent over a planned extension of the city’s magnetic levitation, or maglev, train through residential neighborhoods.

They live in China’s most Western mainland city, and they’ve learned the advanced Western concept of NIMBY (Not in my back yard). And they’ve taken to the streets.

And Shanghai’s government has been forced to pay attention.

The single most relentless enemy of authoritarian governments is the middle class. Even George III’s Venezuelan nemesis, Hugo Chavez, failed in his attempt to modify the constitution.

Citizens who have attained middle class status by dint of hard work, and loosened societal constraints, can embrace artifacts of civilization available to those living above the subsistence level.

The Internet and its blogs and bulletin boards (those portions that the Chinese government can’t censor).

Don’t think there’s much of a middle class in Burma as yet. So that 2007 effort was doomed. Like Chicago Cubs fans everywhere, one can only say, “wait until next year!”

… is only short for the reader, not, for heaven’s sake, the blogger! But kudos to faithful reader for getting this far!