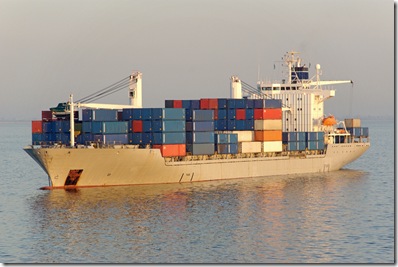 Went after everyone’s favorite hateful big business, Wal-Mart, a couple of posts ago, as we explored their ham-fisted attempts at influencing presidential election politics.

Slate’s Daniel Gross, whom after all gets paid to write these things, did a nice job exploring the issue (but yr [justifiably] humble svt was there with typically cogent commentary the previous evening, thank you very much; my son sent me the Journal story well after I had harvested it into WindowsLiveWriter, in preparation for the post. Just setting the record straight!

Lately, we’ve become intrigued as we learn that the mechanism that allows Wal-Mart to be Wal-Mart…

After all, these are the guys who have rolled back prices so relentlessly that they’ve rolled up entire industries and sent the jobs and our treasure to China, at the expense of zillions of decent paying blue collar jobs in the U.S.

… globalism, is under ferocious attack.

…. Cheap oil, the lubricant of quick, inexpensive transportation links across the world, may not return anytime soon, upsetting the logic of diffuse global supply chains that treat geography as a footnote in the pursuit of lower wages. Rising concern about global warming, the reaction against lost jobs in rich countries, worries about food safety and security, and the collapse of world trade talks in Geneva last week also signal that political and environmental concerns may make the calculus of globalization far more complex.

“If we think about the Wal-Mart model, it is incredibly fuel-intensive at every stage, and at every one of those stages we are now seeing an inflation of the costs for boats, trucks, cars,” said Naomi Klein, the author of “The Shock Doctrine: The Rise of Disaster Capitalism.”

All of that consumer stuff that packs the shelves of Wal-Mart, and, to be fair, its competition, and all of the so-called big box stores: the toys, the apparel, the electronics and decorative accent pieces for your great room; all that stuff got to Wal-Mart in 40-foot shipping containers.

END_OF_DOCUMENT_TOKEN_TO_BE_REPLACED

Well, most of our robotic forces are air forces these days, but we keep learning about “spiders” and the like that are meant to assist ground troops.

It’s not just about protecting precious lives, although heaven knows that should be a sufficient rationale for investing in this sci-fi like technology.

It’s about substituting for Army and Marine ground troops that simply aren’t available.

Fred Kaplan, who writes most cogently on military affairs for Slate.com, has an intriguing analysis.

We don’t have any more soldiers to send to Afghanistan unless we take some out of Iraq.

Secretary of Defense Robert Gates wants to send 7,000 more U.S. troops—about two brigades—to Afghanistan, according to the May 3 New York Times. But there’s a problem, which the story underplays: We don’t have any more troops to send. The Army is in a zero-sum state: No more soldiers can be sent to Afghanistan without a one-for-one reduction of soldiers in Iraq.