Alternative energy technology has been of continuing interest in this nanocorner of the ‘Sphere©. One of our favorite posts discussed the emerging technology in some detail.

Today’s most emailed article out of the NYTimes details another take on solar power, from the Nevada desert. No shortage of sand, or, even better, sun. And much more predictable than wind (another topic we’ve looked at several times, most recently here). 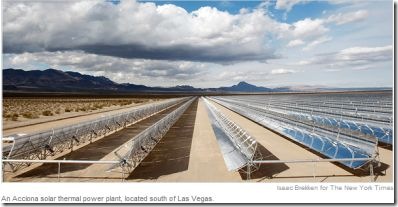 END_OF_DOCUMENT_TOKEN_TO_BE_REPLACED

mm294: Making the world unsafe for bats and birds

Wind power, as are all alternatives to our majority present day power generation technologies, is of increasing interest, especially as coal-fired power and nuclear power plants are presently deemed obnoxious.

This nanocorner of the ‘Sphere© has covered alternative energy a number of times, and wind power specifically, most recently here and here.

Today’s NYTimes journeys to Texas to find the fastest growing region for wind power generation, since nothing, but nothing is done by half in Texas (except, perhaps, the wits of our sitting President, most proud of his Texas origin).

SWEETWATER, Tex. — The wind turbines that recently went up on Louis Brooks’s ranch are twice as high as the Statue of Liberty, with blades that span as wide as the wingspan of a jumbo jet. More important from his point of view, he is paid $500 a month apiece to permit 78 of them on his land, with 76 more on the way.

“That’s just money you’re hearing,” he said as they hummed in a brisk breeze recently.

END_OF_DOCUMENT_TOKEN_TO_BE_REPLACED

Twice within a couple of these holiday weekend days the NYTimes has featured stories on power generated by modern wind turbines.

Quite intriguing, really, the theory that power can be produced without burning fossil fuels, without creating 2billion years of hazardous nuclear waste, without the variability of the winter’s snowfall (influenced lately by drought).

Well, of course it’s hardly that simple. As the pair of stories make clear, no work of man is without controversy, and wind farms are apparently not as benign as proponents have long claimed. 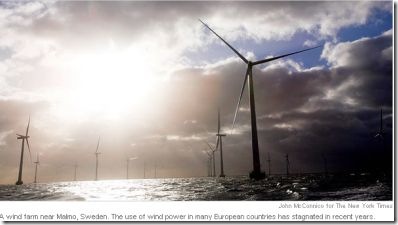 MALMO, Sweden — Steadying himself on the heaving foredeck of an inspection ship recently, his face flecked by spray, Arne Floderus pronounced it a good day for his new offshore wind farm.

A 30-mile-an-hour wind was twirling the fingerlike blades of a turbine 380 feet above his head. Around him, a field of turbines rotated in a synchronized ballet that, when fully connected to an electrical grid, would generate enough power to light 60,000 nearby houses.

“We’ve created a new landmark,” said Mr. Floderus, the project manager of the $280 million wind park, one of the world’s largest, which was built by the Swedish power company Vattenfall.

The park, in a shallow sound between Sweden and Denmark, testifies to the remarkable rise of wind energy — no longer a quirky alternative favored by environmentalists in Denmark and Germany, but a mainstream power source used in 26 nations, including the United States.

Yet Sweden’s gleaming wind park is entering service at a time when wind energy is coming under sharper scrutiny, not just from hostile neighbors, who complain that the towers are a blot on the landscape, but from energy experts who question its reliability as a source of power.

So the wind doesn’t blow 24/7/52… who knew? And it turns out that people no more want wind farms next door than they do coal powered generation plants or Three Mile Island. The concept is called NIMBY. Not in my back yard. The elemental conflict between private property rights and the greater good. 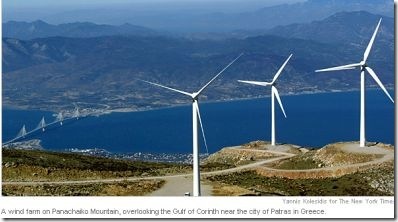 THE tiny Greek island of Serifos, a popular tourist destination, depends on its postcard views of sandy beaches, Cycladic homes and sunsets that blend sea and sky into a clean wash of color. So when a mining and energy company floated a plan earlier this year to build 87 industrial wind turbines on more than a third of the island, the Serifos mayor, Angeliki Synodinou, called it her “worst nightmare.”

Greece primarily depends on “brown coal,” a particularly dirty variety that emits much pollution. So wind power has seemed an attractive alternative.

But the huge turbines do catch the eye, and nearby they are considerably noisy.

Debating the Merits of Energy From Air – New York Times

MUDGE‘s first exposure to such objects in any quantity, i.e., a true wind farm as opposed to the occasional country turbine, eye-catching and modern and jarring in a rural landscape though it was, was in Southern California.

Along I-10 just west of Palm Springs is a pass through the mountains featuring what seemed like hundreds of turbines, atop ridges, in valleys, looking like nothing ever seen before. Looked it up today; the farm is called the San Gorgonio Pass, one of several such projects in California. Truly stunning.

But, then again, it’s out there in the desert, next to virtually nothing but the occasional trailer park and chameleon. According to the California Energy Commission, at the time the article was published (2003?), San Gorgonio consisted of more than 2,500 huge turbines.

Breezing along (as it were) the interstate at 79mph, one doesn’t hear them. But they do make a lasting visual impression.

Would I want such an installation in a lake near me? Ugly? Noisy? Destructive?

Given a choice between that, and the nukes that pepper the region that MUDGE calls home (eagerly received by a power-hungry public 50 years ago), can you doubt my response?