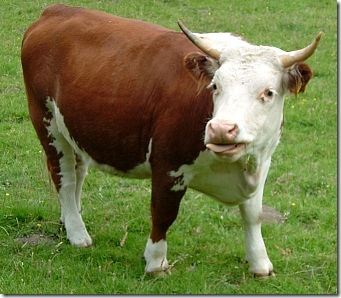 This nanocorner of the ‘Sphere© considers itself a friend to science, and a natural enemy of those who deny it.

In that vein we have discussed the topic of genetically modified foodstuffs a number of times in this space.

But an editorial writer in NYTimes this week tackles the issue of cloned animals in the food chain, science that the U.S. Food and Drug Administration blessed last week, and makes some scientific sense.

Closing the Barn Door After the Cows Have Gotten Out

Last week, the Food and Drug Administration cleared the way for the eventual sale of meat and dairy products from cloned animals, saying, in effect, that consumers face no health risks from them. The next day, the Department of Agriculture asked farmers to keep their cloned animals off the market until consumers have time to get over their anticloning prejudice. That is one prejudice I plan to hold on to. I will not be eating cloned meat.

The reason has nothing to do with my personal health or safety. I think the clearest way to understand the problem with cloning is to consider a broader question: Who benefits from it? Proponents will say that the consumer does, because we will get higher quality, more consistent foods from cloned animals. But the real beneficiaries are the nation’s large meatpacking companies — the kind that would like it best if chickens grew in the shape of nuggets. Anyone who really cares about food — its different tastes, textures and delights — is more interested in diversity than uniformity.

A felicitous turn of phrase: … “meatpacking companies – the kind that would like it best if chickens grew in the shape of nuggets.” Wow! Wish I could write like that!

Species diversity is a good thing, and cloning is its enemy.

The writer’s point is that seeds can be banked (and hurrah! for those heirloom tomatoes that seem to be landing in farmers markets and upscale food stores), but we apparently haven’t decided that “animal seeds,” i.e, their genetic material, are possible to harvest and save.