Previous entries on this topic: 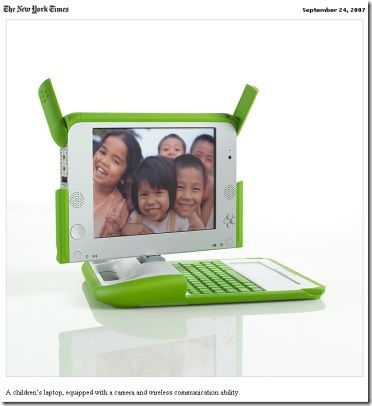 It’s a topic that just won’t quit: One Laptop Per Child. MUDGE‘s older son (the term “MUDGElet No. 2″ isn’t sufficiently dignified for the rarefied confines of Harvard, donchaknow) is a 2005 masters graduate of Harvard’s Kennedy School of Government, and obviously stays in touch.

He forwarded us a link to this story from Harvard Business School (HBS), aware as he is (hmmm, must be faithful reader! Loyalty hasn’t disappeared! Or at least, polite indulgence for the old man…) of this nanocorner of the ‘Sphere©‘s interest in Nicholas Negroponte’s intriguing initiative.

So, though we came late to the story, this past summer, as the PR machinery geared up in preparation for first deliveries, it’s been brewing, as any ambitious project would be, for several years. Thus there are already lessons to be learned, especially marketing lessons, and HBS would like to teach them to us.

HBS Cases: One Laptop per Child

Drop it on the ground. Sprinkle water on its surface. Let it sit in the sun and expose it to swarms of dust—the XO laptop is designed to handle most any abuse from a child. But the journey of the XO laptop from concept to the educational tool for the world’s poorest children is turning out to be a bit more complicated than originally anticipated.

A new Harvard Business School case study called “Marketing the ‘$100 PC'” spells out these opportunities, problems, and challenges from a marketing point of view. As the case asks, can the laptop move out of the realm of “great idea, great gadget” and improve the educational possibilities for children in impoverished environments?

The concept explored is “action pricing,” where a product is developed, as an immense stretch, to meet a very low price, definitely the strategy pursued by OLPC.

The technological challenge was complex: create a tool that would be useful yet attractive to school children, with the strength to stand up to careless and primitive environments, with a screen visible in bright light, a battery capable of receiving power through multiple inexpensive means (a pull cord, a detachable solar panel), and with networking capabilities to teach cooperation and collaboration, all for $100.

“While on the surface it is a laudable vision to get one laptop to each child, and the motives are pristine, there are stumbling blocks in implementation,” observes Quelch.

The conservative nature of governments, complex bureaucracy, and decision-making hurdles can all interfere with early public sector adoption of even the most worthy innovation, he says. This slower-than-expected adoption and diffusion may have surprised the leaders of OLPC.

And finally, OLPC faces what has to be gut-wrenching competition from the fiercely competitive computer industry, who, never letting “not invented here” bother them ever, have leapt into the fray. Guess what, you don’t have to be a non-profit to sell computers for $200 — imagine what they really must cost to manufacture!

So, while I’ve cherry-picked the article, it’s still worth a visit. You even get the opportunity to purchase the case itself, if you’re interested in adding the subject to your own marketing/business curriculum.

Give One Get One is still running, and remains a worthy cause, especially if you follow Left-Handed Complement’s  suggestion to “Give One, Give One”, with the second one directed toward a third world nation closer to home, Mississippi, for example.

Technorati Tags: geopolitics, technology, education, One Laptop Per Child, OLPC, Nicholas Negroponte, Harvard Business School, John A. Quelch, Give One Get One, XO