[The 100th MM! Wow! Who’d have thought this guy had that kind of attention span!] 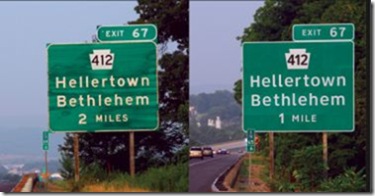 From the usually dependable most emailed list in this day’s NYTimes, a most fascinating story on highway signage. Take a look.

The Road to Clarity

“So, what do you see?” Martin Pietrucha I asked, turning around in the driver’s seat of his mint green Ford Taurus. It was a cold day in January, and we were parked in the middle of a mock highway set on the campus of Pennsylvania State University in State College. Pietrucha is a jovial, 51-year-old professor of highway engineering. His tone was buoyant as he nodded toward the edge of the oval stretch of road where two green-and-white signs leaned against a concrete barrier.

What I saw, Pietrucha knew, was what we all may see soon enough as we rush along America’s 46,871 miles of Interstate highways. What I saw was Clearview, the typeface that is poised to replace Highway Gothic, the standard that has been used on signs across the country for more than a half-century. Looking at a sign in Clearview after reading one in Highway Gothic is like putting on a new pair of reading glasses: there’s a sudden lightness, a noticeable crispness to the letters.

The Federal Highway Administration granted Clearview interim approval in 2004, meaning that individual states are free to begin using it in all their road signs. More than 20 states have already adopted the typeface, replacing existing signs one by one as old ones wear out. Some places have been quicker to make the switch — much of Route I-80 in western Pennsylvania is marked by signs in Clearview, as are the roads around Dallas-Fort Worth International Airport — but it will very likely take decades for the rest of the country to finish the roadside makeover. It is a slow, almost imperceptible process. But eventually the entire country could be looking at Clearview.

The typeface is the brainchild of Don Meeker, an environmental graphic designer, and James Montalbano, a type designer. They set out to fix a problem with a highway font, and their solution — more than a decade in the making — may end up changing a lot more than just the view from the dashboard. Less than a generation ago, fonts were for the specialist, an esoteric pursuit, what Stanley Morison, the English typographer who helped create Times New Roman in the 1930s, called “a minor technicality of civilized life.” Now, as the idea of branding has claimed a central role in American life, so, too, has the importance and understanding of type. Fonts are image, and image is modern America.

The full article includes an interesting slide show (from which the images in this post have been captured), so why not check it out. Remember, though, it’s from the Magazine, so it’s long form, but worthy of your attention.

So, it’s about highway signs, but it’s also about one of this writer’s favorite subjects, typography. I’ve always been a collector of interesting fonts, and I’m guessing that there’s a lot of such interest out in the ‘Sphere, since there are a myriad of typography sites, both interest groups and foundries, to be found.

I’m imagining that there are many amateurs out there like me, whose Fonts file on their PC is quite full.

Just checked, and my C:\Windows\Fonts folder has 249 fonts currently; I’m surmising that there are many, many others tucked away elsewhere, since this sounds like only about half the number I’ve counted in the past (perhaps on one of MUDGE‘s earlier PCs).

Can’t possible use that many, ever. And for L-HC, I’ve used a fixed width font (very typewriter like, in case anyone remembers what a typewriter was) called, appropriately, Lucida Sans Typewriter, because it seemed a distinctive choice at the time, when many choices were made.

Why is typography such an alluring topic for so many people? Because it’s more than just black letters on a white background.

Type is just as much about psychology as geometry. A letter’s shape, its curves, the way it sits next to other letters — all these factors give a font its personality and in turn create an emotion and connotation for the reader.

Personality, emotion, connotation. And I thought it was just some designer’s clever new way of looking at something quite old, the 26 letters of our English alphabet.

This story is on the Times’ most emailed list because most everyone drives (except of course, in the Manhattan home of the Times!), and can relate to poorly designed signage. Quick, at 75mph, do I exit for Smithton at the first exit, or the next? There’s glare, is that route 65, or 86? 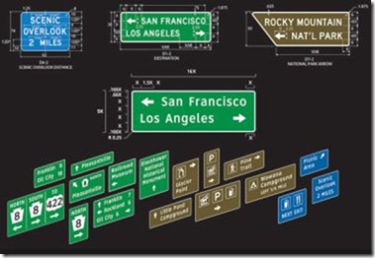 Driving long distances at night is a task I seldom undertake as cheerfully as once I did, and glare and poorly worded and designed signs are part of the reason, though not the only one. But that’s a story for another time…

The lonely campaign fought by Meeker and Montalbano for so many years, is a worthy one, no question.

Of course, these days, the most pressing issue is going to be examine and FIX ALL OF THOSE GODDAMN BRIDGES ALREADY!