In this short attention span world, it’s an extraordinary story that commands one’s S.A.S. for eight full pages. This is that extraordinary story. It’s an investment, faithful reader, for which yr (justifiably) humble svt hopes you’ll take the plunge. 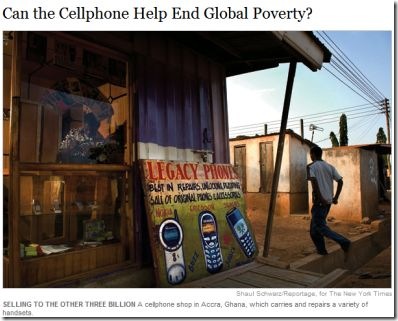 We last tackled the relationship between technology and the developing world some time ago in a post worth re-savoring (well, I did!).

END_OF_DOCUMENT_TOKEN_TO_BE_REPLACED

As an aspirational technologist, MUDGE has been watching with some bemusement the announcements from Google regarding its plan to bid on the auction for the 700MHz spectrum. A link in the clip below explains:

The radio spectrum is being returned by broadcasters as they move from analog to digital signals early in 2009. The signals can go long distances and penetrate thick walls. The auction is seen as a last chance for a new wireless player.

What does Google have in mind, anyway? As the auction approaches, the outlines of strategy seem to be looming out of the fog.

Google will change this industry forever

Now that Google has officially announced that it will bid on the 700MHz spectrum, most of us are speculating about the possibilities. And while I have my own beliefs about where Google will go with the spectrum, I’m sure many of you have your own.

But regardless of where you stand on this issue, one thing remains certain: the future of the technology industry is currently being shaped by high-paid Google lawyers and accountants who are working out the details of this auction.

Simply put, we’re on the precipice of something groundbreaking that will change this industry forever. Whether it will be good or bad is unknown, but regardless of the long-term effect, Google has its sights firmly planted on this 700MHz spectrum and if you ask me, we won’t even know what hit us.

Don Reisinger has some fascinating, if rather stunning, ideas about what he thinks Google is up to.

Wow! Breathtaking. But, Google has the vision, and the deep pockets, thanks to its utterly incomprehensibly colossal market capitalization, to bring it off.

As counterpoint, we present the incisive and highly influential Om Malik:

So Google Will Bid For Spectrum. Will It Play To Win?

For the past few months, Google CEO Eric Schmidt has hinted at every opportunity that Google (GOOG) will bid for the auction of the 700 MHz spectrum. So it shouldn’t come as a surprise that they issued a press release today and confirmed that they will bid on the so-called C-block of the 700 MHz spectrum.Big deal — because Google is not in it to win it. Like in an opening move in a game of high-stakes poker, Google will place an opening bet, but is unlikely to raise it.Google CEO Eric Schmidt in the press release said:

No matter which bidder ultimately prevails, the real winners of this auction are American consumers who likely will see more choices than ever before in how they access the Internet.

Excuse me, that ain’t the language of a winner.

Malik’s post links to a couple of his posts from earlier this year explaining the issues.

So Google Will Bid For Spectrum. Will It Play To Win? – GigaOM

What’s going on here? Malik believes that Google’s vision is, or has become, constrained, perhaps due to the multiplicity of players. Reisinger has the more romantic view, if you will, of a breathtaking strategy that will, indeed, change the game forever.