mm257: The R-Word – Not that racy television show…

On more and more minds, and lips, lately is that dreaded R-Word, recession.

First some news that we won’t have to work too awfully hard to relate to the topic at hand.

1. A critical gear in the export engine gets stripped

The aerospace competition between Europe’s Airbus and the U.S.’s Boeing has been hard-fought (think: Saturday-night saloon, brass-knuckles style) commercial dueling of a classic nature.

Thus it was with no small satisfaction that Boeing watched Airbus announce delay after delay delivering its latest product, the immense 600-passenger A380, finally released to its first customers late in 2007.

Now, the shoe is on the other foot, as Boeing yesterday was forced to admit that its latest product, the new-age, environmentally sensitive 787 Dreamliner, has encountered delivery glitches of its own, the impact of which will push deliveries back to 2009.

Here’s the word from Boeing’s home-town paper, the Seattle Post-Intelligencer (sorry, Chicago Tribune, but Boeing’s head may have relocated, but its heart remains in Washington State).

It was 90 days ago Wednesday that Boeing troubleshooter Pat Shanahan took over the 787 program after then-Dreamliner boss Mike Bair was sacked.

A week earlier, The Boeing Co. had announced an embarrassing six-month delay, with the first Dreamliner deliveries to airlines slipping from May until the end of 2008.

Boeing believed at the time that it would be able to complete work on the first plane in its Everett factory and have it flying by the end of March. It is the first of six that will be needed for the flight test program before the 787 can be certified by regulators to carry passengers.

The story rings true enough; the 787 is a new aircraft, being assembled a new way.

The 787 represents a new way of building airplanes for Boeing, which turned over most of the manufacturing and assembly work to key partners in Italy, Japan and elsewhere in the United States.

But those partners were unable to complete a significant amount of work before the unfinished sections of the first of six test-flight planes arrived in Everett for final assembly. Boeing has struggled to catch up on all this “travel” work.

It will take a more adept macroeconomist than yr (justifiably) humble svt (not a very high bar to scale either) to tell us the effect of this delivery delay on the economy. Exports are an important piece of the economic pie, and Boeing a critical element of that slice.

Boeing sneezes, and we all should start looking around for our Nyquil.

2. Okay, it’s a recession. Which candidate makes the most sense?

There’s a presidential election campaign going on, you may have noticed.

NYTimes’ Paul Krugman, one of our favorite economic analysts, takes a look at their positions. Voters are getting nervous; tell us you know how to make us feel better:

Suddenly, the economic consensus seems to be that the implosion of the housing market will indeed push the U.S. economy into a recession, and that it’s quite possible that we’re already in one. As a result, over the next few weeks we’ll be hearing a lot about plans for economic stimulus.

Since this is an election year, the debate over how to stimulate the economy is inevitably tied up with politics. And here’s a modest suggestion for political reporters. Instead of trying to divine the candidates’ characters by scrutinizing their tone of voice and facial expressions, why not pay attention to what they say about economic policy?

In fact, recent statements by the candidates and their surrogates about the economy are quite revealing.

And he proceeds to get to the heart of each candidate’s economic sound bites.

Can’t help but wonder what Michael Bloomberg thinks… Mike, Mr. self-made billionaire, what get’s us out of our funk, fast?

Another of MUDGE’s favorite economists, Daniel Gross of Slate, weighs in on our looming distress, and how it could provide a wake-up call to U.S. business:

The Good News About the Recession

Maybe it will finally teach Americans how to compete globally.

A recession may be upon us, which would mean fewer jobs, declining tax revenues, and sinking consumer confidence.

But for some (congenital Bush-bashers, the Irvine Housing Blog, critics of rampant consumerism), the parade of bad news is an occasion for schadenfreude….

(By the way, schadenfreude is defined thusly. Admit it, you always wanted to know but never bothered to look it up. Sequitur Service© at your service!)

… They enjoy seeing inhabitants of the formerly high-flying sectors that got us into the mess—real estate and Wall Street—being laid low. Others hold out hope that a recession will iron out distortions in the housing market, thus allowing them to move into previously unaffordable neighborhoods. Some econo-fretters hold out hope that reduced imports and the weaker dollar—both likely byproducts of a recession—will help close the trade deficit. And a few killjoys believe recessions can be morally uplifting. “High costs of living and high living will come down. People will work harder, live a more moral life,” as Treasury Secretary Andrew Mellon put it in the disastrous aftermath of the 1929 crash and ensuing Depression. Not for him stimulus packages and enhanced unemployment benefits. “Liquidate labor, liquidate stocks, liquidate the farmers, liquidate real estate.” (Thanks in part to such comments, voters liquidated Republicans for a generation.)

With the exception of a few gleaming stars, like our friends Boeing, U.S. companies have been woefully ineffective at selling to global markets.

The world is running away from us. The volume of global trade in merchandise has been increasing rapidly. And it’s not just the United States importing goods from China. It’s China importing natural resources from everywhere and building infrastructure in sub-Saharan Africa, sub-Saharan Africa buying oil from the Persian Gulf, Dubai investors purchasing Indian real estate, Indian builders buying German engineering products and services, and German engineers buying toys made in China. With each passing day, an increasing number of transactions in the global marketplace do not involve the United States. We’re still a powerful engine. But the world’s economy now has a set of auxiliary motors.

We know we’ve been floundering; the way out may well be to find business leaders with global skillsets.

The good news about the recession. – By Daniel Gross – Slate Magazine

It’s going to be an uphill fight. We’ve earned our way into this economic distress: outsourcing our jobs instead of figuring out how to become competitive; living high on borrowed money that is now coming due big time; wasting geopolitical and real capital, and thousands of young American lives, on a poorly designed, inadequately executed, military misadventure in Iraq.

We hope you enjoyed this week’s three-part episode, and hope to heaven that we don’t have to do run too many more of them!

Friday is apparently catch-up day here at L-HC. In mid-July, Boeing rolled out the 787 Dreamliner to great acclaim.

Based on how industrially complex modern designed from scratch aircraft are, should we be surprised that delivery times are slipping?

Boeing Co. officials acknowledged for the first time Wednesday that there is an increased risk it won’t meet its delivery schedule for its first 787 Dreamliner.

Production glitches have forced the planemaker to postpone the new jet’s maiden flight, once slated for late summer, until sometime between mid-November and mid-December, Scott Carson, president and chief executive of Boeing Commercial Airplanes, said on a conference call with analysts and reporters.

That leaves Chicago-based Boeing just six months to gain federal certification for the 787 before the first aircraft is due to be delivered to Japan’s All Nippon Airways in May. To compensate, the company plans the most aggressive flight testing for the groundbreaking jet in its history.

Boeing still believes it can deliver the first plane on time. But the delays leave it with little or no buffer to deal with any problems it discovers during its flight tests, said Mike Bair, who leads the 787 program.

And, indeed, it’s the complexity that’s making problems for Boeing.

Remember how everyone beat up Airbus because their schedule for the gigantic double-decked 380 has slipped by a couple of years?

Boeing made out well, reopening production of a 40-year old 747 model that seemingly was destined to cease manufacture, due mainly to Boeing’s aggressive selling to customers such as FedEx and UPS who found Airbus’ 380 delays unacceptable.

And during this duress, Airbus’ original, too-derivative design for a Dreamliner competitor, model 350, failed to move the market and has required a total redesign, which has delayed prospective deliveries of the newly named 350XWB until the middle of the next decade.

Airbus, a typical European governmental/industrial mashup of Tower of Babel proportions, has gone through multiple violent management changes as a result.

But, guess what? Boeing has discovered for itself that designing and manufacturing a commercial airliner, in these days of global participation (i.e., if you want to sell airplanes to Indonesia, you’d better manufacture some component there, even if it’s a landing gear door), is a pretty tricky business, requiring logistical organization perfection on a worldwide scale.

And, remember the Challenger tragedy of 21+ years ago? It was an average, utilitarian, unglamorous O-ring that did it in.

And the Dreamliner’s current problems are with average, utilitarian, unglamorous fasteners.

For want of a nail, indeed… 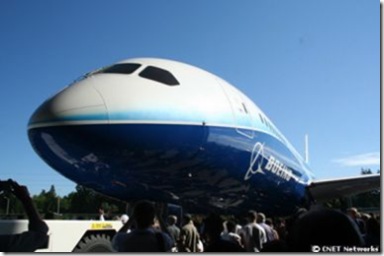