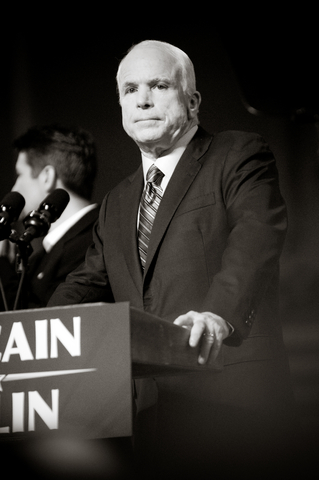 George F. Will is one of the best known conservative commentators writing for a major daily newspaper. And, he makes no bones about his appreciation for the Chicago Cubs, who in the past few days have reached the next milestones in what should, by all rights, be their Brigadoon Year (go ahead, click the link — it’s one of my favorites, and you read it here first!).

Mr. Conservative Pundit George F. Will had some very cogent observations regarding the character of one John S. McCain, Republican presidential candidate. Unexpectedly, at least to this progressive observer, and to others who have picked up on this today, Mr. Will is not happy with Sen. McCain.

Under the pressure of the financial crisis, one presidential candidate is behaving like a flustered rookie playing in a league too high. It is not Barack Obama.

Channeling his inner Queen of Hearts, John McCain furiously, and apparently without even looking around at facts, said Chris Cox, chairman of the Securities and Exchange Commission, should be decapitated. This childish reflex provoked the Wall Street Journal to editorialize that “McCain untethered” — disconnected from knowledge and principle — had made a “false and deeply unfair” attack on Cox that was “unpresidential” and demonstrated that McCain “doesn’t understand what’s happening on Wall Street any better than Barack Obama does.”

Senator, the chairman of the Securities and Exchange Commission regulates the stock-related activities of publicly traded corporations.

It’s the Federal Reserve, and the other regulators of the banking system, as well as legislators charged with that responsibility, SENATOR, who should be castigated for allowing the banks to act so reprehensibly and irresponsibly.

And, Senator, that’s castigated, not decapitated!

These are calamitous times. Henry Paulson is not content with mortgaging our children and grandchildren — he’s grasping down four or more generations of indebtedness: $2,333 for every living man, woman and child in the U.S, and the meter is still running.

Somebody revoke this man’s license to practice economics!

Meanwhile, the electorate is learning more every day about its candidates (with the glaring exception of Gov. Palin, sealed tight in her protective media-free bubble lest anyone have a chance to learn once and for all that, underneath the gun-toting, Creationist, abstinence teaching — except at home — retro hairdo is … nothing at all).

Will’s bottom line: Obama lacks experience; but a bright Columbia University and Harvard Law graduate has the diplomas to prove that he is educable.

McCain’s shoot-from-the-lip impulsiveness is a dangerously destructive character defect. Bottom of his class at the Naval Academy, indeed. How can that be repaired?

And I, too, am very much a fan of calm, but firm, reason in the face of adversity.

Guess that makes us both Obama fans, too, George?

It’s it for now, thanks.

This entry was posted on Tuesday, September 23rd, 2008 at 9:16 pm and is filed under Economy, McCain, Obama, Politics, Presidential election. You can follow any responses to this entry through the RSS 2.0 feed. You can leave a response, or trackback from your own site.

6 Responses to mm501: Noted Cubs fan tees off on McCain