Those looking for the smoking guns on torture and the mishandled war on terrorism within the Bush administration seem to have found them.

Frank Rich has a must read column in today’s NYTimes, reviewing “The Dark Side” by Jane Mayer, to be published July 15. 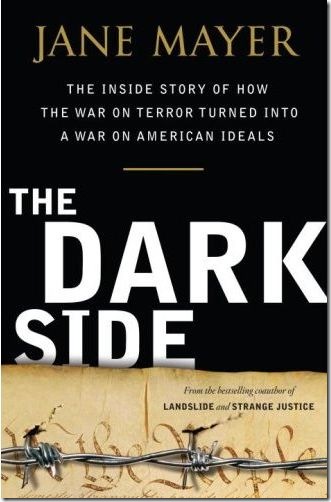 Seems like the book is going to be a must read, also.

WE know what a criminal White House looks like from “The Final Days,” Bob Woodward and Carl Bernstein’s classic account of Richard Nixon’s unraveling. The cauldron of lies, paranoia and illegal surveillance boiled over, until it was finally every man for himself as desperate courtiers scrambled to save their reputations and, in a few patriotic instances, their country.

“The Final Days” was published in 1976, two years after Nixon abdicated in disgrace. With the Bush presidency, no journalist (or turncoat White House memoirist) is waiting for the corpse to be carted away. The latest and perhaps most chilling example arrives this week from Jane Mayer of The New Yorker, long a relentless journalist on the war-on-terror torture beat. Her book “The Dark Side” connects the dots of her own past reporting and that of her top-tier colleagues (including James Risen and Scott Shane of The New York Times) to portray a White House that, like its prototype, savaged its enemies within almost as ferociously as it did the Constitution….

In the name of defending against terrorism, the Bush administration has systematically violated the law, and the evidence is finally exposed to the light of day.

Nixon parallels take us only so far, however. “The Dark Side” is scarier than “The Final Days” because these final days aren’t over yet and because the stakes are much higher. Watergate was all about a paranoid president’s narcissistic determination to cling to power at any cost. In Ms. Mayer’s portrayal of the Bush White House, the president is a secondary, even passive, figure, and the motives invoked by Mr. Cheney to restore Nixon-style executive powers are theoretically selfless. Possessed by the ticking-bomb scenarios of television’s “24,” all they want to do is protect America from further terrorist strikes.

So what if they cut corners, the administration’s last defenders argue. While prissy lawyers insist on habeas corpus and court-issued wiretap warrants, the rest of us are being kept safe by the Cheney posse.

But are we safe? As Al Qaeda and the Taliban surge this summer, that single question is even more urgent than the moral and legal issues attending torture.

Thus the illustration at the top of this post. In fact, some top administration officials, past or present, have been warned publicly not to travel outside the U.S., due to international war crimes court exposure!

Top Bush hands are starting to get sweaty about where they left their fingerprints. Scapegoating the rotten apples at the bottom of the military’s barrel may not be a slam-dunk escape route from accountability anymore.

No wonder the former Rumsfeld capo, Douglas Feith, is trying to discredit a damaging interview he gave to the British lawyer Philippe Sands for another recent and essential book on what happened, “Torture Team.” After Mr. Sands previewed his findings in the May issue of Vanity Fair, Mr. Feith protested he had been misquoted — apparently forgetting that Mr. Sands had taped the interview. Mr. Feith and Mr. Sands are scheduled to square off in a House hearing this Tuesday.

And, as Rich points out, while apparently highly competent in the arts of torture, the Bush-Cheney cabal has shown very little competency actually controlling America’s terrorist threat, beginning in the early days, well before 9/11.

Folks, it’s not just unreconstructed peace-niks who recognize that the Iraq war has been not only incompetently prosecuted, but was sold to this nation as a result of incompetently vetted, even criminally biased, intelligence reports.

And, terrorism, the supposed target of that Iraq folly, as well as a mission rapidly becoming unaccomplished in Afghanistan?

Flourishing, and very possibly more dangerous than ever.

So there are two pressing priorities, and they needn’t nor shouldn’t wait for January 20, 2009:

Note!: the links to Amazon.com used above are for the convenience of faithful reader and represents no commercial relationship whatsoever. Left-Handed Complement should be so fortunate as to ever collect remuneration of any kind for this endeavor, and in any event it’s against WordPress.com’s rules. I can link, so I link. It’s technology. It’s cool. It’s an artifact of Sequitur Service©. Deal with it.

This entry was posted on Sunday, July 13th, 2008 at 6:35 pm and is filed under "War on Terrorism", 9/11, Afghanistan, Criminal behavior, Government, Iraq occupation, Politics, Terrorism, War. You can follow any responses to this entry through the RSS 2.0 feed. You can leave a response, or trackback from your own site.