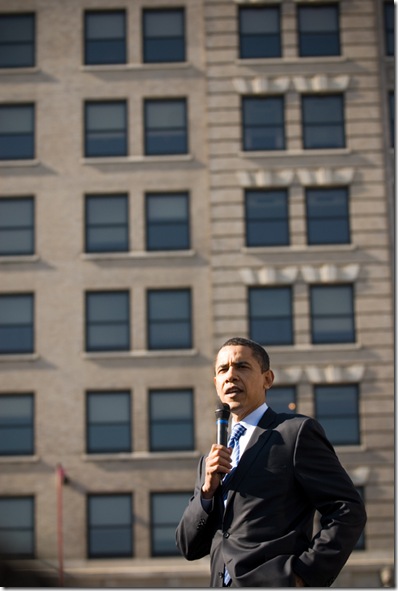 We wrote last post about John McCain’s electoral vulnerability. In the spirit of equal time, we cannot overlook Barack Obama’s slips, slides and stumbles in the month since he triumphed over Hillary Clinton and became his party’s presumptive candidate.

McCain’s crippled party knew what they were getting, and settled. Obama, though, raised up by the multitude of starry-eyed idealists and their grass-roots web sites and donations, has run into an on-line buzz saw as his passionate fans observe him taking positions that seem disappointingly like politics as usual.

So, they’ve struck back.

Obama’s online muscle flexes against him

Fans use his Web site to rip shifts in policy

The same Internet-fueled power that led to historic gains in organizing and fundraising for Sen. Barack Obama‘s presidential campaign is now providing a platform for fiery dissent in a most unlikely place: his own Web site.

Amid criticism from the left that he has eased toward the center on a number of issues in recent weeks, the presumptive Democratic nominee has angered some of his most ardent supporters while triggering something of an online mutiny. Thousands are using MyBarackObama.com to angrily organize against him because of a changed position on terrorist wiretap legislation that awaits Senate action as early as Wednesday.

The dispute has forced Obama to respond in ways never before seen in a presidential campaign, demonstrating the Internet’s growing role in the democratic process and the live-by-the-click, die-by-the-click potential it holds for politicians.

The last straw was the vote in the Senate on the Foreign Intelligence Surveillance Act, which threatens the privacy of millions of innocent citizens in an attempt to expand the government’s ability to monitor suspected terrorists, and indemnify communications carriers from the legal fallout.

While Obama promised to fight against the bill during the primary season, he has changed tack, and joined 68 of his colleagues approving it today.

For many, who bought into the hope for the end to politics as usual, at least from their candidate, this is shockingly disillusioning, and many are not taking it lying down.

Late today, the political blog of the NYTimes, The Caucus quoted chapter and verse.

It should come as no surprise to Senator Barack Obama that his vote today in favor of expanding the Foreign Intelligence Surveillance Act is drawing cries of outrage from many corners of the liberal blogosphere. After all, the senator’s own campaign Web site had become a focal point for his supporters to express their displeasure with Mr. Obama’s stance on the bill.

That was the case again today. Carl from Ft. Worth, Texas, posted a message on Mr. Obama’s Web site this afternoon. The subject line read: “Obama just lost my vote.” He continued:

“I am disgusted. Obama will NOT receive my vote in November, regardless of whether it means McCain wins (at least HE’S being honest with us). Once again, Dems picked the wrong guy in the primaries. Time to leave the party I guess.”

Other comments struck much the same theme. Patrick in Chicago wrote “Can I get my money back this candidate appears to be defective” and Christopher from San Francisco put it simply “Senator Obama, you fail.”

Obama received some support from the blogosphere, where a few noted how tough it is for a candidate to vote against anti-terrorism security measures. But not much.

It’s most interesting that much of the outcry has been given voice on Obama’s own web site.

Elections of any kind, from elementary school boards of education to president of the United States, require one to make evaluations of the candidates on a variety of issues. One usually chooses the candidate who makes the most sense on the one issue most important to the chooser.

Over the past 20 years, on the presidential scene, one has finally settled on the least worst candidate, with the expected outcome.

Young voters, and progressives of all ages, found Obama’s campaign so refreshing since he apparently represented a change from business as usual. And they flocked to his campaign, contributed sweat and dollars, and won him the primaries.

It remains to be seen whether the outrage expressed on Sen. Obama’s web site over the past few days will grow into something of substance, seriously weakening his prospects for what should have been a tip-in at the convention in Denver, not to speak of the general election in November.

Yr (justifiably) humble svt believes that, whether one is a delegate in Denver, or a citizen facing the ballot in November, voters will choose Obama regardless.

Because if he doesn’t quite represent their idealistic hopes for change that he originally represented, he certainly will be the least worst choice.

This entry was posted on Wednesday, July 9th, 2008 at 8:35 pm and is filed under Obama, Politics, Presidential election, The 'Sphere. You can follow any responses to this entry through the RSS 2.0 feed. You can leave a response, or trackback from your own site.