This is a multiple event weekend. In addition to observing the Independence Day holiday just past, July 5 marks Mr. & Mrs. MUDGE‘s wedding anniversary.

As well it should, this milestone will by necessity minimize disposable time devoted to the art of blogging, so in place of a totally new post, we’ll leave you with one of our favorite efforts. It’s actually quite a shame that it’s all too timeless.

There’s most read, and then there’s favorite. This is a post which yr (justifiably) humble svt is, regrettably, but not regretfully, not at all humble about.

From last summer, originally posted September 29, 2007, and originally titled “mm156: There’s a war on, folks, and this must be a military weekend.”

So, yesterday’s post on Predator (not the Governator’s flick, the UCAV, silly!) was not impelled by news, but rather by the (semi-) creative gestation process.

Then, today, while strolling through Digg (which this MUDGE must admit has somehow elevated itself over what was happening a few weeks ago — could it be that school is back in session and people are a bit more serious-minded?) found a couple of Navy related stories.

Now, MUDGE and the U.S. Navy go way back. No, never served. Yes, as one interested in the history of technology, and therefore military history, and technology in general, and the Navy has long embodied applied technology at its most dramatic.

This interest apparently was infectious, and this draft evader (in thought if not in deed) was bemused to have spawned MUDGElet No. 2, mentioned before in this space, a proud graduate of the U.S. Naval Academy, and distinguished former lieutenant in the Navy’s surface warfare community.

Parents: be careful what you read, and what books and magazines you leave around for your kids to find!

Just kidding. I couldn’t be prouder of our children, and their spouses, and No. 2’s spouse happens to be proud graduate of the U.S. Naval Academy (tough as it is for men, extraordinarily so for women), and distinguished former lieutenant in the Navy’s surface warfare community.

So, two stories. One odd in and of itself; one an intriguing window into the state of the generation of young women and men just a year or so younger than MUDGElet No. 3. 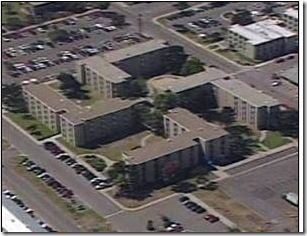 CORONADO, Calif. – The Navy will spend as much as $600,000 to modify a 40-year-old barracks complex that resembles a swastika from the air, a gaffe that went largely unnoticed before satellite images became easily accessible on the Internet.

Typical government decision-making: no one can see our error, so let’s ignore it.

Don’t get MUDGE started about swastikas. I don’t hold Indians responsible for an ancient religious symbol.

As a boomer, born three years after the full panoply of horror was daylighted in a way that the world could not longer ignore, I manifestly do hold Nazi Germany responsible for every murderous, dreadful and inhuman act performed under that forever tainted symbol, and the successor generations of Germans get less benefit of the doubt from this curmudgeon than from many.

Not the Navy’s best building. If there wasn’t a war on, I’d vote for demolishing the place, just because.

Military recruiting in this age of volunteer soldiering, rather than my generation’s drafted, has not previously been a problem for the Pentagon. Oh, they keep needing to seed the ground, with education benefits, and with retention bonuses (MUDGElet No. 2 reported that he passed on a $50,000 re-up bribe to resign to go onto grad school).

But, now there’s a war on. And, while the Navy isn’t on the ground in Iraq and Afghanistan and taking the casualties that the Army and Marines (yes, a branch of the Navy) are taking, recruiting today’s 17-24 year-olds is a challenge.

This story comes, quite indirectly, courtesy of Salon.com’s excellent technology blogger known as The Machinist.

Noah Shachtman, the master of Wired’s Danger Room blog, and Entropic Memes both have cool posts about a presentation put together by some Navy experts regarding the difficulty of recruiting “millennials,” Americans aged 17 to 24, to the armed forces. In the words of the presentation, the kids are not alright: They’re “coddled,” “narcissistic praise junkies” who “demand respect” though they lack experience, and who are so comfortable with technology that talking to them is like “dealing with a somewhat alien life force.” 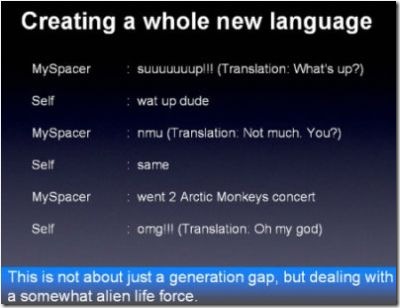 Navy recruiters! Of course you’re having trouble recruiting, and it has nothing to do with the fact that the generation you are focusing on doesn’t speak your language.

Of course “the millennials” speak your language. If all else were equal, the signing bonuses, and education rewards should work for that generation as well as it has for its predecessor’s.

The problem is, Navy, that there’s a war on. Soldiers are dying, or are taking combat injuries that the hospitals aren’t dealing with effectively.

Is there any wonder that the volunteers aren’t breaking down the doors of the Navy recruiters’ offices?

Even “millennials” watch the news.

This entry was posted on Saturday, July 5th, 2008 at 8:00 pm and is filed under "War on Terrorism", Civilization, Iraq occupation, Navy, War. You can follow any responses to this entry through the RSS 2.0 feed. You can leave a response, or trackback from your own site.