mm301: Sorry, Mudge, Mayor Mike says the answer is no!

Last post, Michael Bloomberg told us that no, he is not a candidate for the presidency in 2008. 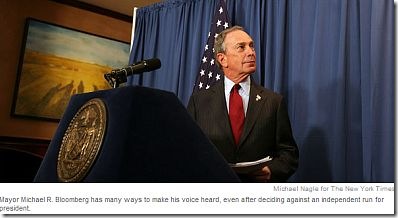 For more than two years, Mayor Michael R. Bloomberg had the ultimate presidential campaign that wasn’t. Aides spent hundreds of hours and untold dollars plotting out a route to the White House. But the prospects for his maybe-I-will, maybe-I-won’t campaign were never tested in the quiet of a voting booth.

This week, as Mr. Bloomberg officially ended his flirtation with a presidential campaign, he said he would seek other ways to influence national politics and spread his gospel of “independent, nonpartisan” politics, perhaps to whoever takes up residence in the White House next year.

One almost feels that it’s embarrassing overkill should we repeat the list of articles we’ve pursued over the past months. Almost.

Just too intriguing to stay away.

But, our fantasy of an Obama-Bloomberg ticket? Vigorous and inspiring poetry at the top; universe-class accomplishment at second chair. What’s not to love?

Mr. Bloomberg on Thursday dismissed the possibility of running for vice president. But he clearly yearns for a prominent role, and the person involved with the discussions about his future suggested he could become treasury secretary or another cabinet member someday.

Sorry, MUDGE, the answer is no. Bloomberg in the cabinet? Done deal, whomever, of whatever party wins.

But he’s a big picture guy and shouldn’t settle.

Mayor Bloomberg wants to be influential, help set the agenda, make an endorsement.

Only, endorsements don’t count for much anymore.

After all, our dreadfully uninformed populace never heard of most of the endorsers, including Mayor Mike.

When he figures this out, maybe he’ll change his mind about the vice presidency. It’s that national stage he belongs on.

This entry was posted on Friday, February 29th, 2008 at 10:36 pm and is filed under Politics, Presidential election. You can follow any responses to this entry through the RSS 2.0 feed. You can leave a response, or trackback from your own site.

2 Responses to mm301: Sorry, Mudge, Mayor Mike says the answer is no!