Hi, Neighbors! Time for a new installment in our ongoing series…

Found several stories of interest today; while folks are Deciding in Iowa they’ve apparently sucked all the decision-making positrons out of the atmosphere, so we’ll sample all three…

First, Gail Collins writing in today’s NYTimes seconds the emotions expressed in Slate (and highlighted here) the other day by Christopher Hitchens.

The Slice of the Sliver Speaks

As the presidential candidates tell them every single day, Iowans deserve to be the nation’s kingmakers because they are exceptional citizens who take their responsibilities very, very seriously. So tonight, even though it’s very cold — even though it’s Hokies vs. Jayhawks in the Orange Bowl — the sturdy Iowa voters will pull on their parkas and go out to fulfill their historic destiny. Perhaps as many as 15 percent of them!

“Money will become irrelevant once somebody wins the Iowa caucus,” said John (I Currently Have No Money) Edwards. “The winner of the Iowa caucus is going to have huge amounts of money pouring in.” Edwards, the Democratic third-runner, has spent more time in Iowa than many Iowans, who have a tendency to flee to Florida in the winter.

Tonight, the Iowa Deciders will divide into 1,781 local caucuses. Past history suggests that a few of these gatherings may not draw any attendees whatsoever and that several others will consist entirely of a guy named Carl. Attendance has no effect on the number of delegates involved, and we hardly need mention that the whole thing is weighted to give rural residents an advantage. Iowans in politically active neighborhoods where 100 people show up may find their vote is worth only 1 percent as much as, say, Carl’s. This gives them the opportunity to experience what it is like to be a New Yorker or Californian all year round.

Have to admit I never paid much attention to Iowa’s “banana republic” (Hitchens-ism) caucus process — but in 2008, attention must be paid. And then, as Gail Collins advises, ignored.

The Slice of the Sliver Speaks – New York Times

Negative campaigning has a bad reputation, routinely being disparaged as juvenile taunting that serves only to degrade public discourse. A New York Times headline the other day noted “bickering and negative ads in countdown to caucuses,” as though these were the moral equivalent of an old married couple grousing about that mess in the kitchen.

Even devoted practitioners feel the duty to deplore negative campaigning. After commissioning an ad accusing Mitt Romney of grievous departures from conservative wisdom, Mike Huckabee was so remorseful that he refused to run it — though he managed to disseminate his charges in a news conference where he sorrowfully screened the spot for the news media. Explaining his newfound magnanimity, Huckabee asserted, “It’s never too late to do the right thing.”

But what was so terrible about the ad? It merely said that as governor of Massachusetts, Romney raised taxes, left a budget deficit, provided abortion coverage in his universal health-care program, and failed to carry out a single execution — all of which appear to be grounded in fact, and any of which a few voters would find interesting.

The spot thus passes the only two tests voters should apply to any campaign attack: Is it true, and is it important? Accusing Romney of having devil’s horns would be unacceptable because, though significant, it’s not true. Accusing him of owning too many sweaters, though true, would be over the line because it doesn’t matter.

And now for something completely technological…

We’ve spent much time writing about small laptop PCs over the past several months; our emphasis has been on the wonderful One Laptop Per Child program [click here for the most recent entry in the series, which includes links to previous posts].

But there are other small, quite inexpensive laptops in the space, meant for business (or at least non-developing-world education) use. The ASUS Eee is one of the newest, and Rob Pegoraro of the Washington Post took it out for a spin. 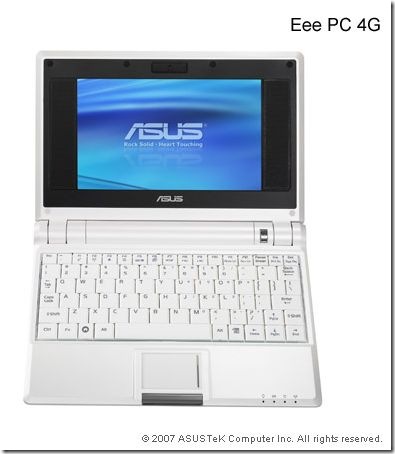 The first time I took Asus‘s Eee PC laptop on a flight, the security screener assumed it was a portable DVD player.

That’s an easy mistake to make. This tiny, two-pound machine is barely bigger or heavier and not much more expensive, at $399 for one I tested and $299 for the cheapest model.

For some time, it has been possible to buy laptops for less than $500. But the ones you see in most stores, such as a $450 Compaq, either weigh too much or can barely run Windows.

The Eee (the Asus site says the name stands for “Easy to Learn, Easy to Work, Easy to Play”) is different. It’s lighter than any super-cheap laptop and cheaper than any ultralight laptop, and it can do Web work about as well as other computers.

But after spending a few weeks using the $399(!) Eee (a step up in memory from the base $299 model!), Pegoraro says, it does get the job done, with some caveats.

With MUDGE’s delicate eyesight and indelicate fingers the ASUS Eee would be a challenge. But, 2-lbs.; 3+ hours battery time; tiny form factor… were MUDGE a road warrior, the Eee would certainly be worth a hard examination.

This entry was posted on Thursday, January 3rd, 2008 at 8:44 pm and is filed under musings, Politics, Presidential election, Technology. You can follow any responses to this entry through the RSS 2.0 feed. You can leave a response, or trackback from your own site.