Among the long-form year-end articles in this week’s edition of the best magazine on the planet, The Economist was a truly unexpected one.

Not the one by the intrepid reporter (an old-school publication, authors of Economist stories are anonymous) who spent a week in a squalid slum in Mumbai — squalid is far too tame a description.

Not the short, but compelling in its implications, observation of the looming shortages and price increases for that major food group for so many Americans, beer, as highlighted in our previous post.

No, the eye-opener was a lengthy view of tournament poker, pegged to the recent £1million win in the first World Series of Poker (WSOP) competition held outside of the U.S., in London, Economist’s home town, by a 19-year-old Norwegian woman, Annette Obrestad.

The contrast is with the ultimate symbol of poker’s old guard, the giant Doyle “Texas Dolly” Brunson, still playing and occasionally winning tournaments in his 70s, and the man whose books have taught two generations of players.

Poker is a very big deal these days, and the emergence of youngsters such as Annette Obrestad is startling (19 years old! a woman!) only if you haven’t been following the trend, as you can see: 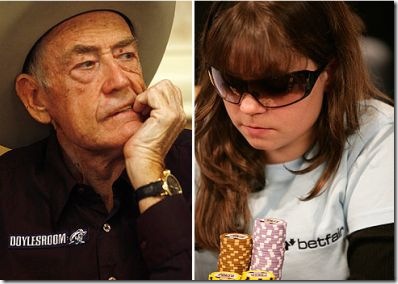 Dec 19th 2007 | Poker is getting younger, cleverer, duller and much, much richer

DOYLE BRUNSON (above, left) is a poker legend. Twice winner of the game’s most prestigious annual tournament, the World Series of Poker (WSOP), held in Las Vegas, the cowboy-hat-clad southerner affectionately known as Texas Dolly also wrote what many consider to be the bible of poker theory, “Super System: A Course in Power Poker”. His reputation among card-shufflers borders on the superhuman. Indeed, after fighting off supposedly terminal cancer in the 1960s, he celebrated his return to the cardrooms with 53 straight wins. Adding to the mystique, both of his World Series titles were won with exactly the same cards: a full house of tens over twos.

Now in his mid-70s, Mr Brunson is still going strong. But not strong enough for Annette Obrestad (above, right), who beat the old master and 361 other entrants in September to win the first ever WSOP event held outside America. Miss Obrestad’s victory, which netted her £1m ($2m), shows how much poker has changed since the days when Texas Dolly, Amarillo Slim Preston and Jack “Treetops” Straus held sway. She is only 19 (making her the youngest ever winner of a World Series bracelet) and she is, of course, a woman. She hails from Norway, not Nevada. And though she had previously won over $800,000 in internet tournaments, the event at London’s Empire Casino was the first time she had encountered serious opposition in the flesh. The poker press refers to her by her online moniker, annette_15.

Two factors have produced the wave of amateur players and winners such as annette_15: on-line poker gaming sites such as Full Tilt Poker and PokerStars; and television, through its broadcasts of such programming as the WSOP on ESPN, and the made for television World Poker Tour on the Travel channel, which The Economist says have made poker

… the third most watched sport on cable television in the United States, after car racing and American football, trumping even NBA basketball. In America, it is regularly aired on ESPN and the Travel Channel, while Britain has its own poker channel. ESPN’s World Series shows regularly get more than 1m viewers, and numbers hold up well even during the busiest sports periods, such as during the major-league baseball play-offs and the NASCAR motorsports season.

So, now we can understand why the poker phenomenon has left the back alley and penetrated the main stream: it’s the money. And the kids, learning on-line, have followed the money.

Poker professionals are fond of describing Texas Hold ’Em, the tournament game of choice, as taking five minutes to learn to play, and a lifetime to master. Television, and especially the on-line sites, have compressed that equation.

The story is pursued into academia (which also has a talent for following the money) and spends time illuminating the debate: luck, or skill?

This of course leads to the hot discussion in the U.S. regarding on-line gambling sites, chased off-shore and still under attack by anti-gambling forces, who somehow have managed to grandfather in horse racing, fantasy sports and lotteries.

This last is right-wing hypocrisy at its typical best. Your pastime is a vice which we will endeavor to prohibit unto the last righteous breath in our body; mine is good, clean, re-election campaign contributing fun.

MUDGE has played the game with family and friends for over 40 years, mainly poorly. I’ve read some books; have a primitive Texas Hold ’Em PC game where I waste some time; even for a while dared to venture on line, but always for play money, not real.

The one and only time I found myself in Las Vegas I was attending a computer conference on my employer’s dime, thank you very much.

It was more than seven years ago, before the game’s recent explosive glamorization, and while I had no difficulty avoiding Venetian’s slot machines, the dice and blackjack tables, but its and Bellagio’s poker rooms were a magnet I couldn’t resist.

Should have. Gambling with strangers, even at the $3/$6 table, is dangerous for this particular player, and figuring odds and especially the whole psychology thing (especially trying to read the craggy locals who I’m guessing make nice unreported supplements to social security off of fish like me) is apparently way over my head.

All told, it was about a $300 lesson, that included one winning session that somehow has remained clear while the other stuff has faded into obscurity in my memory.

So I’ve never been tempted to return to Vegas, even in this age of big money and cheap entries to tournaments for amateurs via the on-line qualifiers.

This entry was posted on Thursday, December 27th, 2007 at 8:04 pm and is filed under Business, Life Lesson, musings, Sports. You can follow any responses to this entry through the RSS 2.0 feed. You can leave a response, or trackback from your own site.