Faithful reader will recall that One Laptop Per Child (OLPC) has been a consistent theme here at Left-Handed Complement. Here’s a handy reminder:

Courtesy of reddit.com (still preferred in this space to its competition, here’s a feature out of the International Herald Tribune showing OLPC in use in Peru, one of the first nations to commit to the program. 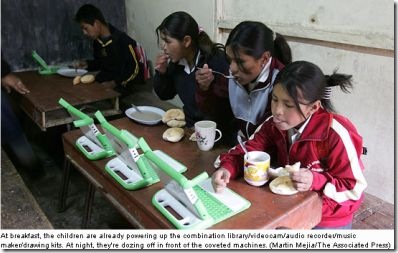 ARAHUAY, Peru: Doubts about whether poor, rural children really can benefit from quirky little computers evaporate as quickly as the morning dew in this hilltop Andean village, where 50 primary school children got machines from the One Laptop Per Child project six months ago.

These offspring of peasant families whose monthly earnings rarely exceed the cost of one of the US$188 (€130) laptops — people who can ill afford pencil and paper much less books — can’t get enough of their “XO” laptops.

At breakfast, they’re already powering up the combination library/videocam/audio recorder/music maker/drawing kits. At night, they’re dozing off in front of them — if they’ve managed to keep older siblings from waylaying the coveted machines.

“It’s really the kind of conditions that we designed for,” Walter Bender, president of the Massachusetts Institute of Technology spinoff program One Laptop Per Child, said of this agrarian backwater up a precarious dirt road.

Founded in 2005 by former MIT Media Lab director Nicholas Negroponte, One Laptop has retreated from early boasts that developing-world governments would snap up millions of the pint-sized laptops at US$100 (€70) each.

Idealism, as is usual, has been clobbered by reality, and Negroponte’s hoped for millions of orders have not materialized. As in any manufactured product, it’s the classic chicken and egg issue: low price = high volume (assuming an attractive and viable product); high volume = low price (economies of scale).

And as we’ve theorized (but read nowhere else) the falling value of the dollar, plummeting since the program was first announced several years ago, has made unrealistic the ambitious $100 target, further impairing success on the imagined scale.

And, competition has rushed in now that OLPC has proved the concept, further impairing the ability to meet the original stretch goal.

Peru made the single biggest order to date — more than 272,000 machines — in its quest to turn around a primary education system that the World Economic Forum recently ranked last among 131 countries surveyed. Uruguay was the No. 2 buyer of the laptops, inking a contract for 100,000.

Negroponte said 150,000 more laptops will get shipped to countries including Rwanda, Mongolia, Haiti, and Afghanistan in early 2008 through “Give One, Get One,” a U.S.-based promotion ending Dec. 31 in which you buy a pair of laptops for US$399 (€277.50) and donate one or both.

Peru is where the rubber hits the road for OLPC, and the IHT story highlights many of the challenges: teacher training, support, internet access in a nation whose remote regions seem to operate much as they must have when first encountered by Spanish exploiters five hundred years ago.

But for all of the challenges, it’s a hopeful story.

There’s still time before 31-December (program, and tax year deadlines) to participate in Give One, Get One. And, if you follow advice first expressed in this space some time ago, and even noted in the IHT story, you might want to make it Give One, Give One. In fact, as we said three months ago…

This is a wonderful cause, and I would think that people who would find a $399 purchase with a 50% charitable component affordable might also wish, as the story suggests, to donate the PC they’re entitled to a (not third world, but certainly third rate) school in this country.

God knows that there are pockets of the third world within these preciously regarded borders of ours, many within our biggest cities. Then it becomes a $399 charitable contribution, serving to further education among the deserving needy in our own country as well as beyond.

If Peru’s example is typical, then OLPC’s little green machine certainly appears to be the transformative tool that Nicholas Negroponte envisioned.

Technorati Tags: One Laptop Per Child, OLPC, Peru, Nicholas Negroponte, Give One Get One, technology, education
Advertisement

This entry was posted on Tuesday, December 25th, 2007 at 7:53 am and is filed under Education, musings, Technology. You can follow any responses to this entry through the RSS 2.0 feed. You can leave a response, or trackback from your own site.