It’s been an ongoing theme (here, here and here) at Left-Handed Complement: the pandering, wrong-headed concentration on corn derived ethanol as the U.S. main alternative to Saudi (and Nigerian, Gulf of Mexico and North Slope) petroleum to fuel our transportation system.

This past weekend, the NYTimes featured a fascinating look at non-corn alternatives to powering our SUVs. 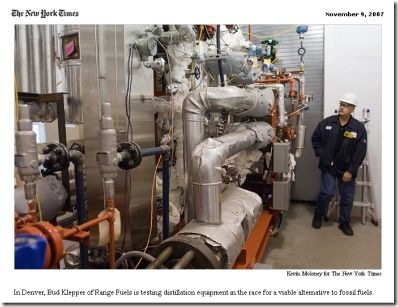 For years, scientists have known that the building blocks in plant matter — not just corn kernels, but also corn stalks, wood chips, straw and even some household garbage — constituted an immense potential resource that could, in theory, help fill the gasoline tanks of America’s cars and trucks.

Mostly, they have focused on biology as a way to do it, tinkering with bacteria or fungi that could digest the plant material, known as biomass, and extract sugar that could be fermented into ethanol. But now, nipping at the heels of various companies using biological methods, is a new group of entrepreneurs, including Mr. Mandich, who favor chemistry.

The conceptual problem with ethanol from corn has always rested in the strong suspicion that the energy required to process corn to burn in one’s automobile exceeds the yield of energy so created.

Ethanol from corn is a political hot button, especially for all of the presidential campaigners prostrating themselves before Iowa’s farmers — isn’t it high time to divest this country from its inappropriate emphasis on Iowa and New Hampshire in the primary process?

You don’t see Georgia influencing election trends, and yet:

In Georgia alone, enough waste wood is available to make two billion gallons of ethanol a year, Mr. Mandich said. If all that material could be captured and converted to fuel, it could replace about 1 percent of the nation’s gasoline consumption.

Obviously, there are some very bright people working hard at solutions, made increasingly economically attractive as the baseline of comparison to petroleum-based fuels persists in climbing inexorably toward $4/gallon.

And, corn-based or not, it looks like ethanol is going to be the end result of all of this chemical creativity, since it’s ethanol that has the Congressionally mandated tax credit.

MUDGE used to believe that the fuel cell guys had the answer, but what with the way the real world works, I can’t see corner hydrogen pumps popping up in many neighborhoods in my lifetime. So chemically derived ethanol will have to do.

Good to see U.S. innovation persists. Like the current IBM advertisements proclaim, it’s easy to say, and so very much more difficult to actually do.