First of an occasional series

With no greater expertise than that of one fascinated with technology, its history, and its future, we embark on an exploration of the future of military aviation, as exemplified by the increasing numbers of remotely piloted aircraft, UAVs (Unmanned aerial vehicles) and UCAVs (… Combat … …).

The impetus was this recent posting about the creative use of the Predator UAV by an enterprising officer, Greg Harbin, who has been lobbying the Pentagon for increased use of a tool that brings the output of surveillance performed by Predator directly to the front line without delay.

I’d been aware of the growing use of robot aircraft for some years. Not because I encounter them in my daily life! Because I have long had an “armchair” interest in aviation. Long years ago, I frequently read Flying magazine, dreaming of one day taking lessons and taking to the air.

Never happened, although my late brother-in-law apparently long harbored a similar dream, which in the years before cancer took him he was finally able to realize, together with his young son, who now is in his senior year in the Air Force ROTC program at a major university, having earned his pilot’s license, and qualified for combat training upon his graduation next spring.

But MUDGE has confined his interest to the armchair, telling himself that real life has superceded idle imagination.

I no longer read Flying, haven’t for decades, since its audience are the doctors and captains of industry who actually do fly themselves around. MUDGE is neither doctor nor captain, and just can’t relate.

Instead many years ago I found an intriguing publication out of England (home of the Economist, best magazine on the planet — what is it about the British?) called Air International.

AI covers the global aviation field, both military and civil, manufacturers and their air force and airline customers, and is sometimes complete to the point of obsession. Some fun, huh? Well MUDGE thinks so.

They’ve had some features through the years about the UAV/UCAV phenomenon, but, I’m thinking, as flyers themselves, the editors must share an ambivalence about the entire topic of robot flying with professional pilots, military especially, who may well believe that they represent the last generation of their kind.

So, I did some independent research, with the assistant of the globe’s favorite research assistant, Google.com.

So, let’s get started. Here’s the first Predator, Predator A: 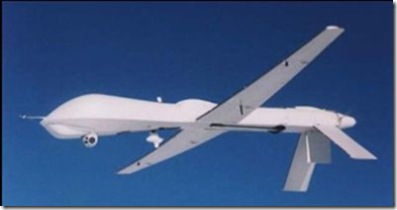 In Jan 1994 an Advanced Concept Technology Demonstration (ACTD) programme to develop a Tier II Medium Altitude Endurance UAV was awarded to General Atomics. General Atomics already had the GNAT-750 series of UAVs flying, and this version was developed to eventually become the Predator A. The Predator A has the same low-wing monoplane design, consisting of a high aspect ratio wing attached to a fairly narrow fuselage and a fully articulated inverted V tail – the vehicle is constructed from carbon-epoxy / Kevlar composites. The fuselage houses both the payload and all the fuel for the vehicle. At the rear of the fuselage is an 80hp four-cylinder Rotax 912UL fuel injected four-stroke engine, driving a 4ft 11in variable pitch pusher propeller. Subsequently, the 912UL engine was replaced by a 113hp Rotax 914 four cylinder four-stroke turbocharged engine. A fixed nose mounted colour TV camera is used for remote piloting and a GPS internal navigation system is also installed. The mission equipment consists of a Northrop Grumman AN/ZPQ-1 Tactical Endurance Synthetic Aperture Radar (TESAR), developed from a system planned for the cancelled A-12 strike aircraft and a Wescam Versatron 14TS Infra Red / Electro-Optical (IR/EO) sensor turret. Line of sight control and transfer of data is accomplished by C and Ku band datalinks. However, the biggest difference in the Predator from the GNAT-750 is the addition of a Ku-band SATCOM link, with the antenna housed in a bulge above the nose.

From the same article, here’s a view of the controllers’ module (one to fly, one to control the payload); 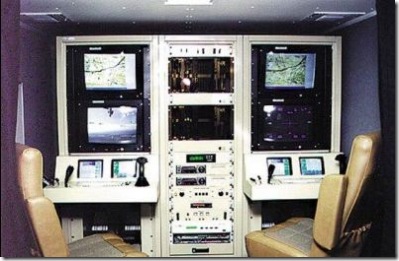 Predator B is the much more capable current model, the subject of the Greg Harbin story. Here’s some of what spyflight.co.uk, the source for this section, has to say about Predator B.

The next stage in the Predator development is the Predator B, a much larger and more capable machine. … The biggest difference, apart from the more conventional ‘upward’ V tail, that Predator B has over the Predator A is the increased payload from 450lbs to 475lbs and the ability to take this payload up to 50,000ft for 25hrs if necessary. 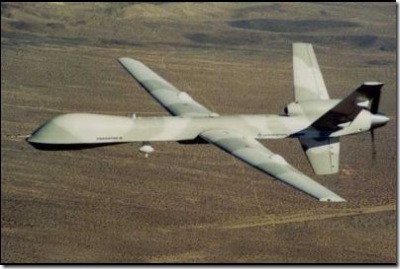 Think about it. Human pilots have life support requirements. An aircraft built to accommodate a pilot and weapons controller: with sufficient stores of oxygen, hydration and nutrition; built strong enough to handle 50,000ft altitude with the necessary pressurization equipment and protection; space to take a break (25-hour flights!) — more likely a second crew with space and stores for them; fuel to carry it all… now you’re talking a pretty big aircraft.

Take the mammals out of the equation, or at least out of the air, and the problem of extended flight at extended altitudes becomes resolvable with a much smaller (read: harder to see/kill) aircraft.

Have to wonder what happens to all the fighter jocks? Maybe they’ll find work, sooner than they thought, flying for the airlines…

Pilots of remotely directed aircraft like Predator sit in comfortable chairs, flicking buttons, handling joysticks, watching screens, very much like those heroes of yesterday, and yes, today; those guys with the right stuff.

Except these new age pilots are ON THE GROUND. Often, thousands of miles away from their aircraft, insulated from all danger more immediate than carpal tunnel syndrome.

Wonder how the Air Force found the guys who fly Predators out of Nevada?