Have written comparatively little regarding music, until the past few days. Odd how concepts seem to cluster sometimes.

So, first it was that terrific review of that sublime recording of the Bach Goldberg Variations by Simone Dinnerstein, which recording was even excerpted on our local classical station today during their new releases weekly segment.

Then, found very randomly on someone’s blog, that hysterical (I’ve watched it several times and it makes me laugh each time) goof on the performance of Rachmaninov’s Prelude (“only the hands are small!”).

Later the day I posted that one, we went out to our neighborhood Blockbuster to find holiday weekend fare. Sometimes she picks the movies; sometimes I do. This time she did. 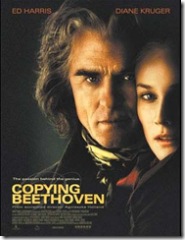 It never made much of an impression when it was released last year; just another of the thousands of releases that MUDGE would never venture out to see in a theatre. I guess I read a review or two:

went to Copying Beethoven expecting, even wanting to like it. Some of it I did like. Immediately, Agnieszka Holland’s usually sure hand is evident in the magnificent opening scene. A closed carriage careens along a muddy road in the 19th century Austrian countryside, past poor trudging women who peer after it as they get out of the way, past fields and woods—past daily life—and beneath wheeling birds whose startled flight matches the passenger’s own urgency. It’s 1827 and young Anna Holtz (Diane Kruger), musical copyist and aspiring composer, is rushing to the death-bed of her “Maestro,” the renowned Beethoven (Ed Harris). But more than anything this carriage scene is about the vivid, almost overwhelming awakening of her senses. It’s chilly, and we are roughly thrown about in Anna’s careening coach along with her, catching flashes of sky and branch, nearly smelling the steaming horses, and above all, hearing everything. Every hoof beat, every crow’s call, every squeak of the carriage, every sudden brief lull, pant and rustle—all of it picked out clearly and then mingled with soaring music. Anna Holtz apprehends the world fully just as the man who’s shown it to her lies on the razor’s edge of death. You see, she has just grasped what he has to offer, barely in time to repay his gift by telling him so

Or this one, from London:

When writing this good can meet with indifference from the hand that feeds, it’s all the more galling to see a dog of a script being thrown filet mignon. The glossy Euro-production Copying Beethoven barks, rolls over, and plays dead for two hours. It is a great example of that time-honoured genre, the biopic so silly it plays like a spoof.

Try this: “My God, Beethoven, you’re even deafer than I thought!” says someone about one of the late string quartets.

Or this: “Beethoven mooned me!” complains his put-upon female copyist, Anna Holtz (Diane Kruger). You won’t struggle to guess which sonata he was miming.

I have to say, though, that it made a better impression on us, watching at home ($4.29 vs. $18.00 never hurts either). The centerpiece comes in the first hour: the performance, chopped, hashed, sliced and diced as it was arrayed in the film, of the 9th Symphony. It was compelling, not for one looking for an authentic, complete performance (although it was taken from a masterful one), but for the film’s depiction of its emotional affect on the listeners.

There are moments in music that one would love to have a time machine available to go back to. And the first appearance of a massed choir is definitely one. Am I subjective about this? Of course. A lifetime ago, I sang in an amateur chorus (its amateurishness enhanced by my presence, alas).

Back to the film. Here’s what one of its writers, Steven Rivele had to say, on a site called Films about Beethoven: Copying Beethoven:

Our film begins in April of 1824 just before the premiere of the 9th Symphony. Beethoven has had a falling out with his copyist, Wolanek, and Schlemmer is desperate to find someone to replace him, to prepare the parts for the premiere. He sends to the Vienna Conservatory for their brightest young composition student, and they send, in return, our fictional heroine, Anna Holtz. (In fact, they sent two young men, but we asked ourselves: What if it had been a woman? This is what enabled us to create a film about the late Beethoven that could actually get financed.) Anna goes to work with Beethoven, helps him prepare for the premier, conducts with him from the wings, and then summons the strength to show him some of her own work. He mocks it, sending her into despair. Later he comes to apologize, and to ask her to help him with the composition of the last string quartets, his legacy to the future of music. In doing so, she learns the deepest meaning of music, and finds the strength to become a composer in her own right. There’s more to it than this, of course, but that’s the gist of it. There is a lot of humor, much soul-searching, a great deal of talk about the meaning of art and the role of musicians, and, of course lots of wonderful music.[…]

…We have had very lively discussions on our forum with regard to authenticity, and Mr.Rivele has explained just how difficult this is to achieve on a limited budget. For example, did the violinists use chin rests? Did the cellos have tailpins? Did the horns have valves? What music would have been played in the taverns?  There can be no doubting Mr.Rivele’s sincerity and desire to present a film covering the last years of Beethoven’s life as accurately as possible, but in order to create a viable project certain artistic licence has had to be taken.

So, perhaps not the greatest film ever made with a musical subject (Amadeus, definitely an inspiration to the filmmakers, who respond with a similarly gritty depiction of 19th Century Vienna might get my vote), but atmospheric, weirdly (a female copyist?) believable, and often profoundly moving.

Definitely worth the renting. And definitely odd that we should end up watching a film with serious music as its theme. Clustering.

Then, in a rare DVD matinée, this afternoon we watched her next choice, the scenery chewing performances of Judi Dench and Cate Blanchett in Notes on a Scandal, which features a characteristically moody music score provided by another long-time favorite of this scribe, Philip Glass.

I have fond memories of driving my little guy to summer camp every day when he was indeed little, five or six years old. All he wanted to hear on the car’s stereo was Glass’ score to Mishima, a film I never saw, because, really, I’m just not that interested in a fanatical Japanese guy who commits hara kiri to make a point, but the music is wonderful.

So, it’s been about serious music for the past several days.

And, BTW, I do consider seriously composed film music serious music. I’d go so far as to say, much of it has more of the qualities that audiences for so-called classical music are starved for: emotional content, a story, tunes.

The Pulitzer-winning college professors who rule the roost in concert halls today (if you can find orchestras that play music written in the last 50 years), present their clangorous, academic, modern for the sake of modernity, scores composed for academic reasons (publish or perish, indeed).

And, naturally, their off-campus audiences stay away.

The film guys: Ennio Morricone, Jerry Goldsmith, Erich Wolfgang Korngold, even James Horner and Hans Zimmer, to slight very many others, speak to the audience directly and compellingly. And their best scores are eminently listenable, even if you never see the movie.

Immersed as I’ve lately been in the pop soup of Pandora.com, it reminds me of what I’ve been missing that Cyndi Lauper, Mike Post, Paul McCartney and the like just aren’t providing.

So, that’s the serious if not totally classical music trifecta. It’s been fun. Maybe we’ll do it again.

This entry was posted on Sunday, September 2nd, 2007 at 5:34 pm and is filed under Classical music, Film scores, Modern music, Music, musings, Theater music. You can follow any responses to this entry through the RSS 2.0 feed. You can leave a response, or trackback from your own site.

One Response to mm125: It <is> a serious music trifecta!