mm121: We’re fighting at least three wars in Iraq. Do you want to end them all? – By Christopher Hitchens – Slate Magazine

Christopher Hitchens is that guy you love to hate. His best seller, God is Not Great is currently No. 5 on the New York Times list (since one needs an account to access the list, I thought I’d just show you the pix): 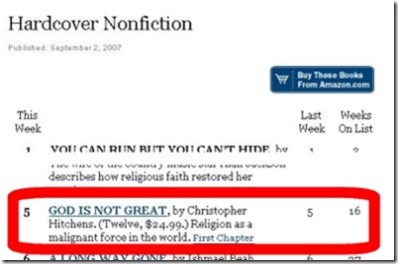 This is not some retiring violet — the man does like to pick a fight.

But yet. He does have a way of making sense.

Here he is in Slate yesterday, making sense:

We’re fighting at least three of them.

When people say that they want to end the war in Iraq, I always want to ask them which war they mean. There are currently at least three wars, along with several subconflicts, being fought on Iraqi soil. The first, tragically, is the battle for mastery between Sunni and Shiite. The second is the campaign to isolate and defeat al-Qaida in Mesopotamia. The third is the struggle of Iraq’s Kurdish minority to defend and consolidate its regional government in the north.

The balance of the article is quite concise for Mr. Hitchens. Take a look.

We’re fighting at least three wars in Iraq. Do you want to end them all? – By Christopher Hitchens – Slate Magazine

So, no wonder the Bush administration is so confounded by Iraq. I’m sure that they have no idea that they’re fighting three different wars there!

And our prospective leaders may have the same trouble:

The ability to distinguish among these different definitions of the “war” is what ought to define the difference between a serious politician and a political opportunist, both in Iraq and in America….

Meanwhile, it is all very well for Sens. Clinton and Levin to denounce the Maliki government and to say that he and his Dawa Party colleagues are not worth fighting for. But what do they say about the other two wars?

Attention, candidates! Please learn already that the USA’s position in the world cannot be summarized in a 20-second sound byte.

What are your substantive thoughts (i.e., body text, not headlines) about the panoply of messes (some we’ve inherited, some we’ve created, some we’re just bemusedly observing) in the world?

Show us your brains, candidates! (And that goes for you putative non-candidates — Michael Bloomberg I mean you!)

Start by telling us what you think of this Christopher Hitchens analysis (I know, you wouldn’t touch his atheistic whatever with a 10-foot whatever so leave his name out of it if you must), but acknowledge that our world is more complex than ABC123.

Wouldn’t it be a wondrous achievement if we elect a president for her/his brains, not his superficialities as showcased through the expenditure of $billions in manipulative advertising and nefarious “swift boaters”?

Will I live that long?

This entry was posted on Wednesday, August 29th, 2007 at 8:08 pm and is filed under Geopolitics, Iraq occupation, Politics, Presidential election, War. You can follow any responses to this entry through the RSS 2.0 feed. You can leave a response, or trackback from your own site.