mm097: AmericanHeritage.com / The Jeep, the Humvee, and How War Has Changed

MUDGE’S Musings (on the road)

BOSTON — A temporary locale, as MUDGE has arrived in Boston for a conference sponsored by the vendor of his web conferencing technology, IBM Lotus.

File this one under: Things I found on the way to finding other things…

The Jeep, the Humvee, and How War Has Changed 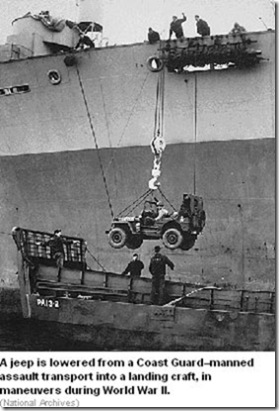 Sixty-six years ago today, on August 1, 1941, the first mass-produced jeep rolled off an assembly line in Toledo, Ohio. The tough little vehicle went on to prove itself well in World War II and become widely popular at home after the war. More than six decades later, the humble jeep’s mammoth grandson, Humvee, is the most hotly debated weapon in a controversial war. The two automobiles tell something about the story of America’s place in the world….

Although America manufactured three quarters of the world’s automobiles, the prewar U.S. Army was no better off. In 1939 it fielded 251 different types of vehicles, few of them able to operate on rough terrain. So the Army put out a call for a four-wheel-drive logistics car. It had to be small and agile but rugged and reliable. Willys-Overland Motors produced the final selection, an inexpensive workhorse that proved its versatility by driving up the steps of the Capitol building. The Army had such confidence in it that one general said early in the war, “When Hitler put his war on wheels, he ran it right straight down our alley.”

Somewhere along the line—and no one is sure why—people started to call the new vehicle a “jeep,” perhaps from “GP,” from general purpose, or after the character “Eugene the Jeep” in the Popeye comic strip, an animal that could go almost anywhere, like Willys’s car.

[Per L-HC’s reformed process, please click the link below for the complete article — but then please come on back!] AmericanHeritage.com / The Jeep, the Humvee, and How War Has Changed

It’s always bothered this observer that the Humvee is totally un-Jeeplike! Big, noisy, uneconomically thirsty: calling it a jeep on steroids is totally uncomplimentary to the jeep as described in this story! Lowest bidder material, at a time when the military’s lowest bidder is politically connected and the process usually corrupt, and/or driven by a congressperson’s district sensitivity.

But the Humvee was designed to haul bullets and bandages, not take on ambushes or improvised explosive devices. Just 235 Humvees in Iraq had any armor at the start of the war. To combat this weakness, soldiers have been “up-armoring” their Humvees with military kits or by welding on scrap metal. The process has risks. It weighs down the trucks and can even keep the doors from opening after IED attacks. Another option is replacing Humvees with heavy armored troop carriers called MRAPs (mine-resistant ambush-protected vehicles). The Army and Marines have already purchased hundreds of those noisy 16-ton behemoths, an even farther departure from the old Willys jeep.

Yet the Humvee’s biggest drawback may actually be the false sense of security it imparts. American troops, many military theorists now argue, are too removed in their vehicles, fighting for Iraqi hearts and minds with a drive-through mentality. The open-air jeep meant that soldiers could, and had to, interact with the people of occupied nations; the closed, air-conditioned Humvee has only isolated American forces from Iraqis. This is even more of a problem with the MRAP, which offers only small, armored windows to peek out of. Though the tactics of the current surge seek to get troops out of their vehicles more often, many politicians involved in the debate over Humvees assume—perhaps erroneously—that more armor means more safety and success.

When the stories began to appear a couple of years ago regarding the ad hoc modifications of Humvees in the field with armor, it was an early indicator of the utter recklessness and inattention to the practical details of modern warfare that the ideologues of the neocon persuasion have foisted on our formerly competent military.

Patton, et. al. didn’t send a jeep when a tank was what was needed. And, unfortunately, this is one problem that a change in administration on January 20, 2009, will fail to impact.

On the domestic front, even Jeep doesn’t do Jeep as well as its competitors. One of MUDGE‘s personal vehicles is a Honda Element, with which I would not like to go to war, but which, crude for a modern Japanese vehicle as it is, is in my opinion* much more refined, practical and well built than even the most expensive consumer Jeep. And please don’t get me started on the uselessness and unseemliness of the civilian version of the Humvee, the embarrassing Hummer!

[*BTW, don’t plan on ever encountering the acronymic “IMHO” on this site. There is seldom, if ever, anything humble about MUDGE, nor will there ever be.]

This entry was posted on Monday, August 6th, 2007 at 11:06 am and is filed under Iraq occupation, musings, Politics, Technology. You can follow any responses to this entry through the RSS 2.0 feed. You can leave a response, or trackback from your own site.

2 Responses to mm097: AmericanHeritage.com / The Jeep, the Humvee, and How War Has Changed