Just another example of why The Economist is, bar none, the most interesting, thoughtful and insightful reading I do.

Vote for me, dimwit

How the electorate is irrational 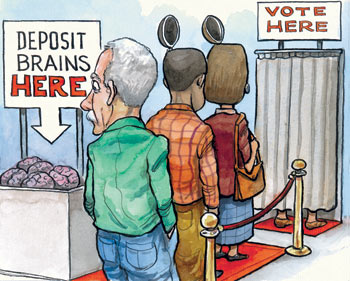 ANYONE who follows an election campaign too closely will sometimes get the feeling that politicians think voters are idiots. A new book says they are. Or rather, Bryan Caplan, an economics professor at George Mason University, makes the slightly politer claim that voters systematically favour irrational policies. In a democracy, rational politicians give them what they (irrationally) want. In “The Myth of the Rational Voter”, Mr Caplan explains why this happens, why it matters and what we can do about it.

The world is a complex place. Most people are inevitably ignorant about most things, which is why shows like “Are You Smarter than a 5th Grader?” are funny. Politics is no exception. Only 15% of Americans know who Harry Reid (the Senate majority leader) is, for example. True, more than 90% can identify Arnold Schwarzenegger. But that has a lot to do with the governor of California’s previous job pretending to be a killer robot.

Many political scientists think this does not matter because of a phenomenon called the “miracle of aggregation” or, more poetically, the “wisdom of crowds”. If ignorant voters vote randomly, the candidate who wins a majority of well-informed voters will win. The principle yields good results in other fields. On “Who Wants to Be a Millionaire?”, another quiz show, the answer most popular with the studio audience is correct 91% of the time. Financial markets, too, show how a huge number of guesses, aggregated, can value a stock or bond more accurately than any individual expert could. But Mr Caplan says that politics is different because ignorant voters do not vote randomly.

Instead, he identifies four biases that prompt voters systematically to demand policies that make them worse off. First, people do not understand how the pursuit of private profits often yields public benefits: they have an anti-market bias. Second, they underestimate the benefits of interactions with foreigners: they have an anti-foreign bias. Third, they equate prosperity with employment rather than production: Mr Caplan calls this the “make-work bias”. Finally, they tend to think economic conditions are worse than they are, a bias towards pessimism.

Mr Caplan gives a sense of how strong these biases are by comparing the general public’s views on economic questions with those of economists and with those of highly educated non-economists. For example, asked why petrol prices have risen, the public mostly blames the greed of oil firms. Economists nearly all blame the law of supply and demand. Experts are sometimes wrong, notes Mr Caplan, but in this case the public’s view makes no sense. If petrol prices rise because oil firms want higher profits, how come they sometimes fall? Surveys suggest that, the more educated you are, the more likely you are to share the economists’ view on this and other economic issues. But since everyone’s vote counts equally, politicians merrily denounce ExxonMobil and pass laws against “price-gouging”.

The public’s anti-foreign bias is equally pronounced. Most Americans think the economy is seriously damaged by companies sending jobs overseas. Few economists do. People understand that the local hardware store will sell them a better, cheaper hammer than they can make for themselves. Yet they are squeamish about trade with foreigners, and even more so about foreigners who enter their country to do jobs they spurn. Hence the reluctance of Democratic presidential candidates to defend free trade, even when they know it will make most voters better off, and the reluctance of their Republican counterparts to defend George Bush’s liberal line on immigration.

The make-work bias is best illustrated by a story, perhaps apocryphal, of an economist who visits China under Mao Zedong. He sees hundreds of workers building a dam with shovels. He asks: “Why don’t they use a mechanical digger?” “That would put people out of work,” replies the foreman. “Oh,” says the economist, “I thought you were making a dam. If it’s jobs you want, take away their shovels and give them spoons.” For an individual, the make-work bias makes some sense. He prospers if he has a job, and may lose his health insurance if he is laid off. For the nation as a whole, however, what matters is not whether people have jobs, but how they do them. The more people produce, the greater the general prosperity. It helps, therefore, if people shift from less productive occupations to more productive ones. Economists, recalling that before the industrial revolution 95% of Americans were farmers, worry far less about downsizing than ordinary people do. Politicians, however, follow the lead of ordinary people. Hence, to take a more frivolous example, Oregon’s ban on self-service petrol stations.

Finally, the public’s pessimism is evident in its belief that most new jobs tend to be low-paying, that our children will be worse off than we are and that society is going to hell in a variety of ways. Economists, despite their dismal reputation, tend to be cheerier. Politicians have to strike a balance. They often find it useful to inflame public fears, but they have to sound confident that things will get better if they are elected.

Easier to diagnose than to cure

In short, democracy is a mess. But dictatorship is worse. Mr Caplan observes that Winston Churchill’s aphorism—that democracy is “the worst form of government, except all those other forms that have been tried from time to time”—usually cuts the conversation short. He does not think it ought to. To curb the majority’s tendency to impose its economic ignorance on everyone else, he suggests we rely less on government and more on private choice. Industries do better when deregulated. Religions thrive when disestablished. Market failures should be tackled, of course, but always with an eye for the unintended consequences of regulation. Mr Caplan is better at diagnosis than prescription. His book is a treat, but he will never win elective office.

Lexington | Vote for me, dimwit | Economist.com

So, now, for the few of us who actually think for ourselves (I know, I flatter both of us unashamedly!), I say now what about Michael Bloomberg? An intelligent man who tells the truth? More follows.

This entry was posted on Tuesday, June 26th, 2007 at 6:22 pm and is filed under Politics. You can follow any responses to this entry through the RSS 2.0 feed. You can leave a response, or trackback from your own site.

One Response to mm034: Vote for me, dimwit | Economist.com